When They Fall from Grace 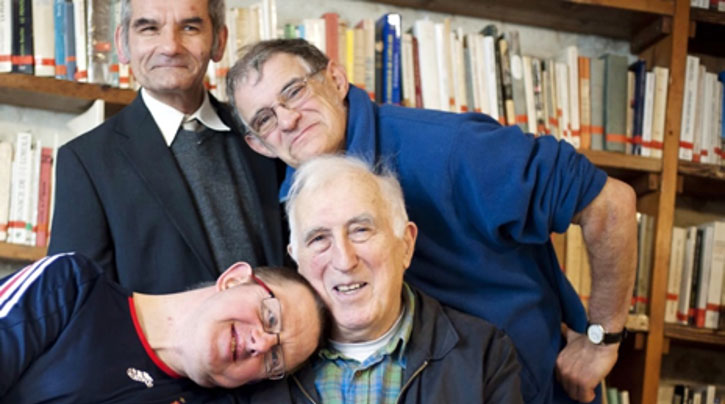 When he died at age 90 last spring, we wrote here praising the work and legacy of the Canadian philosopher, theologian, author, and humanitarian, Jean Vanier.  A man of deep compassion and humility, Vanier was, along with Fred Rogers and Henri Nouwen, a spiritual hero of our team. Becoming Human, his 1998 bestseller, was one of the first books we all read together as Someone To Tell It To was born and began to grow.  The book’s simplicity and profound depth served as a north star for us as we made the commitment to enter into the dark center of the human condition, into its agonizing loneliness and pain.  For us and for many others, Jean Vanier’s life appeared to take on near mythic proportions.

Vanier’s legacy is remarkable.  His most enduring gifts to the world are the two international organizations he founded – L’Arche and Faith and Light – established in more than 119 countries combined, for people with developmental disabilities and those who care for them to live in together with dignity.  His five-decade advocacy for people who have traditionally been marginalized – forgotten, voiceless – is a living testament to what it means to respect, to value, and to love every human being.

We wrote last year that it has been a sacred gift to read his writings, to hear his stories, and to be introduced to the life and legacy of Jean Vanier.  This man, who actually went to live in one of the communities he founded, alongside the residents – as a peer, an equal – was remarkable.  He announced that the people who came to live in those communities are really no different, no less than, any one of us in terms of sacred worth.  It was a sacred choice he made and we are in awe of him for it.

Yet just this week, we learned of another aspect of Jean Vanier’s life, one that shocked and saddened us deeply.

L’Arche International presented the results of an investigation it commissioned last year into horrifying allegations about Jean Vanier. The investigation revealed that Vanier “has been accused of manipulative sexual relationships and emotional abuse between 1970 and 2005. These relationships with six non-disabled women were “described as emotionally abusive and characterized by significant imbalances of power,” according to the report. In addition, the report establishes that Vanier knew of the emotional and sexual abuse perpetrated by his mentor, Father Thomas Philippe, and may have enabled further abuse by being silent about it and by allowing Phillipe to continue to have access to L’Arche community for decades following this knowledge. The women who were abused were left profoundly hurt and in need of psychological therapy for years.

One victim said Vanier told her: “This is not us, this is Mary and Jesus. You are chosen, you are special, this is secret.”

When he died nine months ago, Jean Vanier was lauded as a moral exemplar to people worldwide and a likely future saint in the Catholic Church.  Many institutions were named after him.  His own organization’s investigation shattered that image, saying … “truth matters … the value of every person matters. Always. Unconditionally.”

The response to the news by some was rapid. On Sunday, the University of Notre Dame revoked two awards given to Vanier. Many others expressed dismay, sadness, anger.

One commentator has written, “I can no longer in good conscience call Jean Vanier a saint, but I cannot accept the disturbing truth about him as proof, as some have understood it, that sanctity does not exist.”

So, some have asked, and we do too … How can we reconcile the good and evil of Jean Vanier?

How can those of us who have admired Vanier struggle to reconcile the good he did with the abuse he perpetrated?

Colleen Dulle, producer at America: The Jesuit Review, has written,

It is difficult, but possible and necessary, to hold the truth of both Vanier’s good and evil at the same time. Holding these facts in tension both invites, as the leaders of L’Arche International wrote, ‘mourn[ing] a certain image we may have had of Jean’ and raises important concerns about who holds power … the ways that power can corrupt those who hold it and the disturbing links between spiritual and sexual abuse in so many similar cases in the church.

The shadows Vanier’s abhorrent actions cast remind us that no matter how much good he has done, he was no saint.  No human is.  We must learn, however difficult it surely is, to both acknowledge his lovingly beautiful contributions to the world, at the same time we acknowledge the hateful ugliness he brought upon six women in their vulnerability and defenselessness.

It reminds us starkly of the tension we feel when our heroes destroy our trust, when they fall from grace.

We think of pastors and priests, athletes and actors, authors and educators we’ve admired.

We think of so many of those to whom we’ve listened.  Good people, yet very broken.  Trying hard, against incredible odds, warm hearts, who have been hurt, abused, saddened.  Women and men looking for love in “all the wrong places” after the abuse they received as children or abusing their own children because that’s all they know.  Those who wrestle with suicidal thoughts and sometimes actions because they were bullied in school growing up (which we just heard today).  Others hiding debilitating addictions after a lifetime of feeling unloved, unworthy, unfulfilled.

We believe, as Mother Teresa (the imperfect Saint herself) always used to say, “the extraordinary achievements of ordinary, imperfect human instruments is evidence of the involvement of God.”

May we have the eyes to see the involvement of God –  of redemption, of grace – in this moment of revelation.  A moment that challenges us all to give thanks for a flawed man’s humble, generous commitment to some of the very least of our sisters and brothers, and in the very same moment strive to stop the abuses and say  …