This Crucible of Love 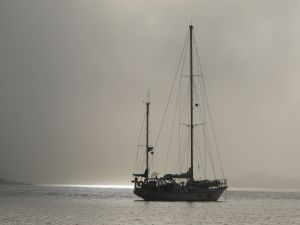 And one clear call for me!

And may there be no moaning of the bar,

When I put out to sea,

But such a tide as moving seems asleep,

Too full for sound and foam,

When that which drew from out the boundless deep

And after that the dark!

And may there be no sadness of farewell,

For tho’ from out our bourne of Time and Place

The flood may bear me far,

I hope to see my Pilot face to face

When I have crost the bar.

His wife was a distant relative of Tennyson’s. He brought along a book of poetry and read these famous words to us before we left the Applebee’s restaurant that rainy, dark November afternoon. The poem played a significant part in the story he wanted to share.

She was his college sweetheart. They were married for 27 wonderful years. They had two daughters together. Their love was strong, growing ever closer, especially in the later years.

But then she died. Too young. Too soon. She had contracted hepatitis C in the hospital when she had gone for surgery. Complications followed and he was left a widower. He wasn’t ready. Who ever is? He would have given anything to take her place.

He said that when the anchor is broken chaos ensues.

She was the family anchor, the one who held them together, stabilized them, grounded them. Without her, they were tossed and torn apart.

He tried to find another anchor for their family, not a replacement for his wife and his daughters’ mother, but to help heal his heart and theirs, to help them be a greater whole again. He remarried. She also had two daughters. But it was too soon. After 10 years together they separated. But they remain cordial and respectful of each other. She was on the next part of the journey with him, when life got even harder.

Oxycontin made its entrance into their lives. His youngest daughter became addicted. When addiction happens, the whole family is drawn in, forcibly, violently, at times. Early on a November 14 night the doorbell rang. When he answered two policemen were waiting. They asked if he was their father. With mounting dread he answered “yes”.

Another light was dimmed.

It was the most shocking moment of his life. His knees buckled. The officers had to help him up. He called his sister and brother-in-law and they talked with him for well over an hour. That phone call – that being able to tell it all in acceptance and safety – enabled him to begin the climb from the darkest pit he’d ever experienced.

In the days following her passing, as many do, he looked for signs that she was okay, that wherever she was it was good. After a heavy downpour one morning, as he was working on the computer, composing an obituary for her, a rainbow appeared after the rain stopped. He went out into the street, running with water, to glimpse its beauty. A red balloon suddenly appeared in the sky, as if kissing the rainbow, he recalled. He felt as if it was a kiss from his daughter to him. It was the sign he needed to comfort his heart and calm his grieving spirit.

On the day she died, he received a call on his cell phone, the screen revealed her number. But after he said “Hello”, there was no response. He called back, but only got her voicemail. He left a message expressing his love. He has no idea if she ever heard it. But he’s convinced that she knew that she was dying, as he looks back on that painful, awful day.

A few years later, his other daughter had a major car accident on a winding dirt road. She slammed into a tree and was very badly broken. It took several years of enduring pain and committing to therapy before she could walk well enough again. As a mom with six children, it put considerable strain on her family. But the strain didn’t stop there. A few years later, one January day, the 5th, he found several voicemails on his phone. They were from his daughter’s best friend from college. She needed him to call her back. This time, unlike before, he knew … she was gone too.

When he gained the courage to call her back, she confirmed his worst fear. His remaining daughter had died.

He recounted what happened:

“She and her husband were driving home on the interstate, after having been out to dinner.  She had just had her birthday on New Year’s Day.  She was driving and lost control of the vehicle.  It flipped over, front to rear, several times.  Her husband was not injured.  The coroner said she may of suffered a cardiac arrest, which caused the accident.  All I can say is thank God her husband was okay.  If both of them had been lost there would have been six orphans.  If he was lost I don’t know if his mother would have been able to be the strong grandmother she’s been since his brother was lost to cancer about nine years ago.”

Tennyson’s poem was shared at each of their funerals. It helped to connect him to them and them together in death – and he hoped a new and eternal life.

Before he told us about each of these tragedies that afternoon we met with him, he asked us a question, moments after we sat down:

“Can you tell me your idea of what heaven is?”

We began to answer:

“We don’t have a ‘sound bite’ response to give you. It’s big and complex and in many ways a mystery. Yet from our limited human understandings we would say, in short, that it’s being in full connection with God, no separation, but complete union with the eternal and the divine. It’s where the things that separate us – the pain, the fear, the competition, the pettiness, the insecurity – no longer exist and we are held in a perfect peace.”

“Yes, and that insecurity is really part of it, isn’t it?” he responded. “We are so insecure about ourselves and our relationships, aren’t we?”

“Absolutely. We also need to say that heaven isn’t just a far away place, something we can only begin to achieve after we die. But, as Jesus said, it’s also ‘at hand’ now. Here. Today. Right at this moment, the only moment we actually have in this life. But in our relationships we can begin to see glimpses of heaven – when we are loved well, when we are listened to, when we can connect deeply and without fear, when we are accepted and affirmed as beloved, when we together can transcend the pain, fear, competition, pettiness and insecurity of this world and life. That’s when we see and feel and experience a glimpse of heaven. It’s then that we are in union with God.”

It’s and “I/I” relationship, I believe, definitely”, he replied. “It’s when we come together not as separate individuals, but in a connection that really, truly coalesces our souls and spirits as one. We are yoked, joined together in a dimension not of this temporal world, but in a realm that does transcend all that hurts us and diminishes us in this life. That “I/I” connection is heaven to me.”

He quoted from the 13th chapter of I Corinthians:

“To be fully known and to know fully”, he continued. “That, too, is heaven to me.”

“I want you to know that these losses in my life have truly brought me something that I admit I never knew or had before. I’m not scared. I have complete confidence in God and what comes next. The words of Romans 5, where it states that – ‘we also boast in our sufferings, knowing that suffering produces endurance, and endurance produces character, and character produces hope, and hope does not disappoint us’ – have become my mantra through all of this. Hope does not disappoint. I have to have hope. I have to have hope to keep going on. I can assure you, I am convinced beyond a doubt that my wife and daughters are all in another realm spiritually with God. Connected. In complete union. I’m not afraid of death. I believe that God is in control of it all. I have that peace.”

He went on to share how much of the 1970’s was his ‘pagan period‘. He didn’t elaborate and in this day; he didn’t need to. There were too many other important things to talk about.

He wanted to share about the change that began to occur in him. In 1979 or 1980, a replaying of the TV mini-series, “Jesus of Nazareth”, portraying the life of Jesus through the accounts in the Gospels, brought profound inspiration and transformation to his life.

He described one scene that still sticks vividly with him nearly 40 years later – when Mary Magdalene is moved to tears by Jesus’ compassionate feeding of the 5,000 with only two loaves of bread and five fish evident among the people gathered to hear him speak that day.

It’s important to note that even when we come to faith, even when we find a new life through our spiritual beliefs and understandings, that life still isn’t perfect or easy or all our worries just melt away. It simply doesn’t work that way. Years later, he admits that he feels guilt and regret over the distance he believed he had from his daughters when they were living. He wishes that he could have been more present, more involved. He wishes that he could have been more of an anchor for them, for the family. He wishes that could have fostered a stronger connection, a deeper bond. He wishes so many things that so many others of us wish too – that we were ‘there’ more, that we had understood more, that we had loved more. He is a work in progress, as all of us are. He keeps going and trying and working at forming the greater connections, putting behind him the life he lived before finding a deeper connection with God and faith in this God of great love.