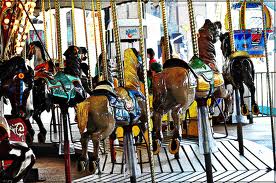 Two roads diverged into one and I took the one less traveled and it has made all the difference.

We live in a world in which people are constantly trying to get ahead and competitiveness drives much of our decision making. Competitiveness can cause us to work against one another and, ultimately, the common good. This is evident in so much of our business and political culture, as well as in many relationships between individuals. For example – a Congress that can barely enact any legislation for fear of who might get credit for it, the CEO who receives obscene amounts of compensation well out of proportion to those also in the company working hard to make it successful, or the father of three who is never at home for his family because he believes his measure of worth and value is based upon how many hours he works, how much he makes, and how many deals he strikes.


But then, we are humbled by a family we spent time with yesterday who supports us in our mission and lives and exemplifies a better way—a road less traveled. This large extended family is VERY successful by the world’s economic standards. They have operated a very profitable amusement park in a resort beach town that for the past 50 years has catered to families. They have had generation after generation of loyal customers and employees. They keep their prices EXTREMELY low. In fact, at one point in the middle of the day we (Tom and Michael) were talking with one member of the family on a sidewalk outside the park as three pedestrians walked by. One of the individuals turned to him and asked,


How much do you charge per ride?


He responded by saying,


Each ride ticket costs 30 cents and if you buy multiple tickets the cost goes down.


The woman gasped, shook her head, and exclaimed,


When we arrived earlier in the day yesterday, the senior member of the family and head of the business was doing exactly what he does every morning – separating the previous day’s trash and recycling. What head of a VERY successful 50-year business spends his time doing that every single day of the season? We were then invited into their family coffee hour which they have each day at 10:30 and were welcomed very warmly. At the same moment, several shipments arrived on site and all the family members’ hands were on deck emptying the trucks on a terribly hot day. Inside the park office, his wife, who is living with cancer, continued to do her part. She folded rags that were used by the employees to clean many of the rides from the previous night. The “president” of the company, their son, was cleaning up a kiddy ride where a child had an accident. And everywhere we went in the park, every family member was working hard to maintain a standard of excellence—but doing so very quietly, humbly, and honorably. Everyone did his or her job with grace, with patience, with good humor, and always with politeness towards all.


A newspaper reporter was coming later in the afternoon to interview the family patriarch, one of countless interviews he has done over the years for various papers, magazines, the radio, and television; their style of business is a marvel, a unique family endeavor that has certainly provided an abundance of profitably and security to each family member. But it has always been provided by treating one another, their employees, and their customers with respect, a generous spirit, and love. They have established their own philanthropic arm, donating to many individuals, charities and missions that enrich the community and the world around them. They do not go about their business with that sense of competitiveness and driven-ness that we all too often see around us. Their uniforms – shorts and polo shorts – are worn by family members and other employees alike. Everyone is dressed the same; no distinctions are mad through their clothing. But they do so in an attitude of service, humbly offering an atmosphere in which families can have memorable fun, enabling them to relax on their vacations.


This morning as we meditate and reflect upon their model and example, we are humbled ourselves. Theirs is a way that we truly believe is better, a road less traveled that actually enhances this world and the common good. We are inspired as well to serve with that same attitude and we believe it is something the world sorely needs—and that life is better for it. Our hope is that together we would follow their example, and model and encourage others to follow it too – the road less traveled, because it is a route that makes all the difference.