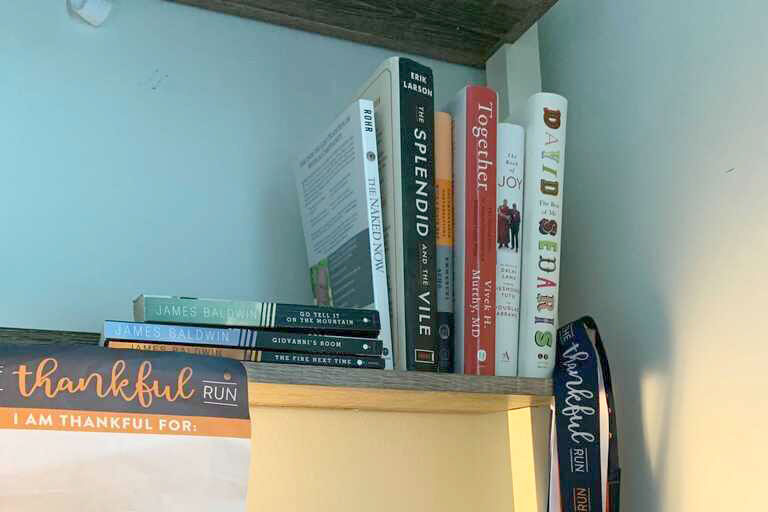 You can be helped to look at the world and see a different perspective.  Where some people see a half-empty cup, you can see it as half-full.  Perhaps people will be moved to see that there are very, very, very many people in the world today who will not have had the kind of breakfast that you had.  Many, many millions in the world today are hungry.  It’s not your fault, but you woke up from a warm bed, you were able to have a shower, you put on clean clothes, and you were in a home that is warm in the winter.  Now just think of the many who are refugees who wake up in the morning, and there’s not very much protection for them against the rain that is pelting down.  Perhaps there is no warmth or food or even just water.  It is to say, yes, it is to say really, you do want to count your blessings. — Archbishop Desmond Tutu

A short while ago, Someone To Tell It To had a bad day. One of those days that emerges out of nowhere, like slipping on a sheet of black ice, leaving us injured and insecure. We all have them. But when we’ve had so many encouraging days, these bad days take us by storm, snowballing all kinds of dark and sinister feelings. And believe us: WE’VE HAD OUR BAD DAYS!

Take for example the night of our virtual 8th Annual Gathering which was “supposed” to go live at a certain time. However, due to a variety of technical issues (something all of us can relate to throughout the pandemic), our event was delayed. We felt disappointed, embarrassed, anxious, despairing, and sad. The night of the event was filled with panic over what to do about it.

We also think back to the night of our 6th Annual Gathering during which were to launch our second book, Someone To Tell It To: Moved with Compassion.  We discovered too late to change anything before the launch that the book had never undergone final editing before it was printed and released to the public.  We felt disappointed, embarrassed, anxious, despairing, and sad.

We think about the time one of our supporters gave a generous financial donation for us to ramp up our marketing efforts.  We overhauled our website, all of our marketing materials, and our logo.  Shortly thereafter, though, we sent out a newsletter to all of our supporters, including the donor who paid for those necessary changes, only to realize that some of the newsletters were sent using our old logo, old messaging, and old materials.  We felt disappointed, embarrassed, anxious, despairing, and sad.

What does an organization or individual do in these situations?

In the corner of my bedroom sits my “home office,” basically a makeshift bookshelf from IKEA turned into a desk.  I hadn’t put a great deal of effort into the space because I had wrongly assumed, like most of us, that my “home office” would be a short-term solution to a short-term problem. I literally spent 30 minutes building the bookshelf, three minutes moving a handful of books from our living room to the bedroom, and two minutes hanging some medals from half marathons I’ve run in recent years and one piece of art.

I’d like to highlight the last two “home office” decorations because they have been paramount for me on the days when the pandemic has dragged on and on and when I’ve hit the pandemic wall.  Running, for me, has been a necessary way to keep me moving, not just physically, but emotionally, mentally, and spiritually.  In the words of marathoner Ambrose Joel “Amby” Burfoot, a former American marathoner who won the 1968 Boston Marathon:

“Running has taught me, more than anything else, that there’s no reason to fear starting lines…or other new beginnings.”

2020 and now 2021 have been marked over and over by new starting lines and new beginnings; I hope I’m learning to embrace each new challenge.

Every mistake is a new starting line, a new beginning, if we choose to see them in that light.

In one of my previous blogs, The Power of One Word, I highlighted a yearly tradition we have with our Someone To Tell It To team – choosing one special word to live by for the year.  My word this year has been “clutter”.  As I wrote in that blog:

I had a hard time deciding, but then, as it seems with every year, my word arrived. CLUTTER. A few weeks ago I was driving through a local community, one of the more beautiful communities in Central, Pennsylvania, when a man driving in a van, opened his window and proceeded to throw a bunch of trash on the road. I’ll be honest, his actions frustrated me. But the more I thought about that image, the more I realized that, I, too, am much like that road. I have a lot of clutter in my life, in my head, in my heart; Saying ‘yes’ to everything, not wanting to disappoint people, feelings of anxiety about the future, harsh judgments, resentments, negative thoughts, and the ‘have to’s’ and ‘want to’s’ that keep me from receiving the good things in front of me. Clutter throws me off balance when I let it take over my mind or my emotions.

Thankfulness is one of the primary methods I’ve used to overcome the clutter in my mind and my heart throughout the pandemic —  in addition to reading, running, connecting with friends via text, email, hand-written notes, phone calls, hikes, etc. Last November, I decided to do something I had never done before, run a virtual half marathon. I wasn’t intending to do it. As face-to-face races were canceled, if I was to meet my goal of running an additional half marathon, I had to throw caution to the wind and face another new starting line, another new beginning.

For weeks, my personal Facebook feed was flooded with advertisements for various virtual races, but one race more than most caught my attention – “The Thankful Runner.”  On the race’s website the description read:

“This has been a year that no one will ever forget!  At this time of year, we’re all reminded that there is still a lot to be thankful for!”

I loved the description and the purpose behind the mission.  I also loved the fact that my contribution would support a worthy cause – Feeding America.

I received my running packet in the mail, a shiny medal, a description of the event, as well as my running bib.  Runners were encouraged to write on the bib what they were especially thankful for and focus on that concept as they ran.  I, however, took a different approach and left my bib completely blank.  After all, how could I choose just one thing when there are so many good graces to be acknowledged, celebrated, and savored?

One of my favorite quotes comes from one of my favorite books about thankfulness by Elizabeth Gilbert: Eat, Pray, Love.  She writes: “We search for happiness everywhere, but we are like Tolstoy’s fabled beggar who spent his life sitting on a pot of gold under him the whole time.”

Therein lies what I believe to be the answer – acknowledging the pot of gold we are sitting on.

Recently, Someone To Tell It To had another bad day — a training event that felt like a failure; that it wasn’t well-received and a terrible mark on our reputation. Once again, we felt disappointed, embarrassed, anxious, despairing, and sad. Following that bad day, our team met via Zoom to process together all that occurred. One of our team members, STTIT’s Chief Listening Officer, Angie Dickinson, thought it might be a good idea to implement a listening practice that has been a crucial part of STTIT’s At The Table training program.

It featured a “Feelings Wheel,” which serves as an opportunity to express all the bad feelings we feel.  Everyone in the group has the opportunity to voice aloud all of the feelings they experienced as a result of that bad day. The feelings were to be free from judgment, response, or criticism. The exercise worked and created a space for openness, vulnerability, learning, honesty, and growth.

We were ultimately able to express thankfulness for the perceived “bad day.”  In talking things out, we all came to realize that our perceptions were actually changing as we talked.  While there were some awkward and frustrating moments throughout the day, we shifted our perspective. We remembered that our training team led the event nearly just as it was planned and were received really well by the participants.

We ended the conversation far differently than when we had begun it.  Instead of feeling like the team had failed or that STTIT’s reputation had taken a major hit, everyone was thankful and fortunate to be part of this mission, thankful for each other and the privilege of ‘telling it to’ each other together, and thankful for startling lines and new beginnings.

Getting back to my running bib for a moment — and hoping to help us all see a connection here — I left my running bib blank as a reminder, especially on those days when we slip on black ice leaving us feeling disappointed, embarrassed, anxious, despairing, and sad, that every mistake, every bad day, is a starting line. A new beginning. But only if we choose to see them that way.

Thankfulness, like running a marathon, takes persistence and determination.  Being thankful doesn’t just happen naturally, especially for those of us who are prone to see the glass half empty. Being thankful happens when we keep moving, choosing, and searching for wonder, beauty, and possibilities in each situation and encounter.

One of the things I’ve had to come to terms with is that thankfulness, like running a marathon, isn’t something I naturally want to do.  I’d much rather wallow in sadness, self-pity, resentment, and CLUTTER. Wasn’t I grateful yesterday? Shouldn’t that be enough to carry me through today’s challenges? The truthful reality is that every day is a new starting line, a blank bib, requiring us to fill in the blank, especially when we don’t want to do so. Thankfulness moves us away from and beyond a narrow-minded focus from what we don’t have to what we do have in abundance.

“Gratitude is the recognition of all that holds us in the web of life and all that has made it possible to have the life that we have and the moment that we are experiencing.  Thanksgiving is a natural response to life and may be the only way to savor it.”

Today, the pot of gold I am sitting on is the cackling and warmth of a wood stove on a snowy morning, a heated blanket, the promise and excitement that my next meeting brings, the “feelings wheel,” and being a part of a team that gives their best every day, knowing and believing that we are a part of a movement of listening that is changing the world one voice, one story, at a time.