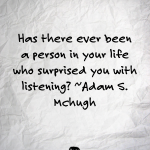 “The first duty of love is to listen.” ~Paul Tillich

The summer between my freshman and sophomore years of college I needed a job to help pay my way through school. A dad of a very close friend of mine offered me a position as a security guard at a local hospital in New Jersey—after hearing that I struggled to find anything else.

Being a “security guard” wasn’t necessarily what I had in mind, but it did bring back images of playing cops and robbers with my three brothers in our basement, fully decked out with our identical uniforms, glistening badges and handcuffs, and obscure nightsticks.

And when I found out what the role really entailed, I was even less excited about doing it. Why they called the position “security guard”, I really don’t know.

In preparation for the job, I attended six training sessions so that I was “equipped” for what “could” occur throughout the summer. By the last day of the training, my dreams of playing cops and robbers were discarded. There weren’t any badges, handcuffs, or nightsticks (*although we did have these sweet looking 80’s uniforms:). The trainer said something like:

“You will be sitting in a room with a new patient each week. Your primary job is to make sure the patient doesn’t fall out of bed or hurt himself or herself or anyone else. Feel free to interact with the patient as many of them don’t receive visitors on a regular basis.”

I raised my hand and was about to ask something snarky like:

But I thought better of it and lowered my arm.

So, I really wasn’t a “security guard” in the way I had imagined I’d be.   Now I was even more discouraged about the job.

About a week later I started my first day. I decided to “give it the old college try” but was already planning an exit strategy if the position didn’t go well.

The first few weeks were a rude awakening. Eight hours, eight hours, with one or two patients, is a loooooong day.

The first patient I sat with was a 65-year-old man who had had a brain aneurism. As a result of the aneurism, his speech was slurred and he drooled when he spoke. It was hard for him to carry on a conversation, even if he would have wanted to. He was easily agitated. I didn’t feel like I accomplished much that week, as most of our interactions were unproductive. I’d ask a question. The man would respond with a sigh or groan or a simple yes or no answer. And that was it.  It was heart wrenching.

The second week was even more heart wrenching than the first. I sat with a young mom who had been in a severe car crash. She was on a ventilator. She, too, was easily agitated. Because of the ventilator, she couldn’t speak. She whimpered. Her whimpers spoke volumes. I remember wanting to give up after the first day because it was too hard to watch, especially after her three small children came into the room and engaged their semi-lifeless mother with tears in their eyes. But I didn’t. I showed up for four days straight and tried to be fully present to the young woman, even if there wasn’t much, if anything, I could say or do other than hold her hand.

But week three was a turning point for the rest of the summer. I listened to a Vietnam veteran who was dying of cancer because of the effects of agent orange he had inhaled during the war. Unlike the first two patients, this man was able to hold a normal conversation. He shared about his life’s joys and struggles. He shared about his hopes and dreams, his fears, his many loves. However, unlike the first two patients, he had absolutely no visitors. By day three, I realized I was his visitor.

In each of those situations, and many, many others throughout the rest of the summer, there wasn’t much I could offer. But I could offer myself. And I did.

In many of the talks we give to various groups, organizations, and ministries, we often get asked the question:

What is one takeaway that you could give us so we can be better listeners?

*In fact, it just happened, again, on a recent radio interview we did last week!

Although we appreciate people’s genuine desire to want to grow as compassionate listeners, as we do too, we often chuckle at the simplicity with which it is asked. It’s almost like asking a carpenter:

“If there is one tool you would recommend to build a house, what tool would you choose”

or asking a painter:

“If there is one color you would choose over all other colors to cover a canvas, which color would it be?”

With Someone To Tell It To we have been in countless situations (like being a “security guard” for an entire summer) where we HAD to listen.

In a few weeks, author Adam McHugh will be speaking at Someone To Tell It To’s annual fundraiser about his mostrecent book, The Listening Life: Embracing Attentiveness in a World of Distraction. We have been re-reading his book in preparation for the event. Early on in his book, Adam talks very openly about the fact that he didn’t get serious about the topic of listening until he was “surprised by listening”.

He writes that when he was a young chaplain, he worked at the cancer wing of the hospital with patients who were receiving chemotherapy treatments or were in the advanced stages and “despair and lifelessness” was widespread. He writes that he “mostly sat and listened because (he) had no idea what else to do.” (page 39).

In other words, Adam HAD to listen. He was put in situations where listening was the only option—and the best option—even if it didn’t feel that way at the time.

Adam goes on to talk about his supervisor named Donna who “surprised” him by her listening:

Donna was my supervisor, and when she and I met individually in the first week, I braced myself for the standard instruction, correction and advice. But that day I encountered a different kind of leadership: I met an authority figure who listened to me. Donna was interested in me, not in telling me what to do or shaping me in her image. She asked me what I thought and felt, what I cared about, what my family was like, who I wanted to be. She listened to me so intently that I would get uncomfortable talking about myself for so long….As Donna and I continued to meet that fall, I began to realize that I wasn’t her project. She wasn’t looking for what she needed to fix about me. The more she listened to me, the more I began to see myself the way she did: as a person. I wasn’t a sick patient, which is the message I had received from previous mentors who seemed intent on performing emergency surgery on my soul….I don’t remember whether Donna ever said that during our weekly meetings, but I completed that internship knowing God’s love in way I never had before. I began to feel a new level of energy for ministry, one that was not motivated by emptiness but by fullness because I had received one of God’s greatest gifts: the gift of being truly heard.” (pp39-40).

In response to that story, Adam, in many of the talks he gives about the listening life asks the question:

“Has there ever been a person in your life who surprised you with listening?”

Again, there isn’t a simple or bumper sticker answer that helps us become better listeners. But there are people, like Adam experienced, who change us because they intentionally listened when we needed to be heard. We shared several examples in our first book, Someone To Tell It To: Sharing Life’s Journey, where people surprised us by their listening. It’s kind of like the adage, “you’ll know it when you see it”; or better yet, “you’ll know it when (they) heard (you).” When you have been truly heard, you will never, ever, forget it. You will remember the kindness, grace, compassion, and unconditional love extended to you, maybe like never before; and as a result, transformation happens.

I guess the encouragement that we at Someone To Tell It To would offer would be this:

1.)  Put yourself in situations where you HAVE to LISTEN (because it’s the most important thing you can offer).

2.)  Think of those people who surprised you by listening. What was it about that “compassionate listener” that changed you? What did that person say (or not say) that showed you the unconditional love and grace you needed?

Our hope for Someone To Tell It To in the future is to start a movement where people are truly heard because everyone has a voice and everyone matters AND to mentor others to be betters listeners in our everyday lives.

Join us on September 30th with author Adam McHugh and you can begin to become a better listener too!

Even though we listen professionally every day, we are constantly learning how to listen better. We can always grow and evolve and become better and better at hearing the hidden depths beyond others’ voices, behind others’ eyes and between the layers of others’ lives.

“We learn to listen because we want to learn to love.” ~Adam McHugh