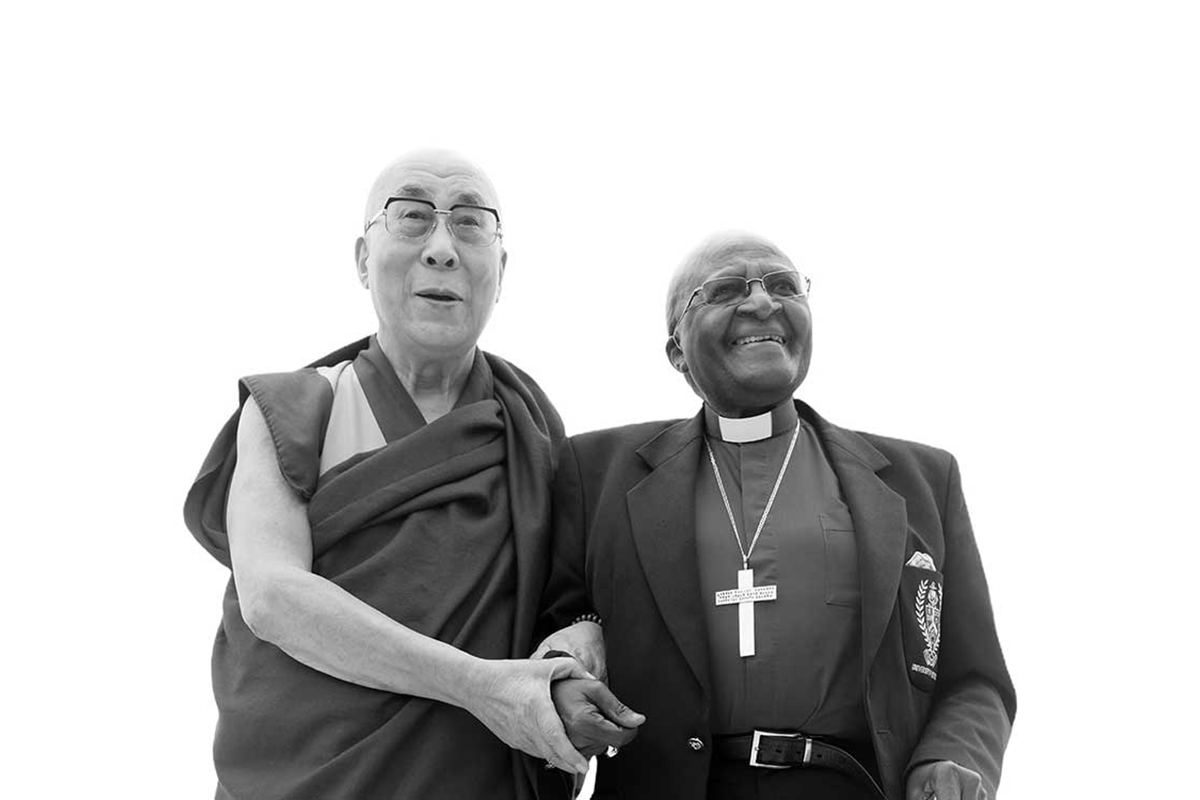 Lately, we’ve been re-reading a favorite book of ours: The Book of Joy. A perfect book for this imperfect time, it accounts the week — which took place five years ago this month — during which His Holiness the Dalai Lama and Archbishop Desmond Tutu spent time together talking about the concept of joy.

We’ve referenced this book several times before. It speaks to us deeply. The wisdom imparted by these two men, both Nobel Peace Prize recipients, is foundational to our work and mission. It speaks to why we at Someone To Tell It To do what we do.

At the moment, we are concentrating on three chapters beginning in the last half of the book — conversations the two men had about gratitude, compassion, and generosity. All qualities that are the marks of joy, outgrowths of living a joyful life.

In our frenzied world — a world of danger in which pandemics threaten our existence, a world of toil in which we become overwhelmed by how to pay our mortgages and rent and provide food for our children, and a world of snares in which the fragility of our sense of well-being and security are revealed — our common default position is not to feel joy. It’s not to feel grateful or compassionate or generous. Instead, it’s our default to draw in, to be relationally wary and distant, to resort to survival modes that often focus solely on ourselves.

The Dalai Lama and the Archbishop go against that impulse and instead model and speak of a different way to react to life’s dangers, toils, and snares.

These men suggest that being grateful is the only way to savor life. They say that gratitude allows us to shift our perspectives “toward all we have been given and all that we have.” It steers us away from a narrow-minded “focus on fault and lack,” and toward a wider perspective of “benefit and abundance.” Instead of counting our burdens, they assert that gratitude moves us toward counting our blessings. Being grateful doesn’t mean ignoring or denying our burdens; they are very real. Rather, it enables us to focus on our ability to rise above our burdens, finding hope and growth within them.

One of our very dearest friends sent us an article this week about Passover, which Jews all around the world commemorated on Wednesday night. In the article were quotes such as these from Jewish families around the country, sharing reflections about the Passover story at this moment in history:

“Our family has had massive Seders in the past. My maternal grandparents are both Holocaust survivors … Coming from a Holocaust background, we were all blown away by how beautiful it was to have everyone at the same table, telling the same story that our ancestors had told about the exodus, having had their own exodus from postwar Europe. This year it is different.”

“For the first time in my life, I’m not going home. The plague element of the Passover story feels real for the first time — the completely overwhelming feelings of fear, anxiety and despair.”

“In the past we have done our best to continue traditions under all circumstances. When our daughter was recovering from a bone-marrow transplant and we couldn’t have company, we made a Seder for our children while the rest of my family put together a Seder at my brother’s home to continue the tradition of being together. Such holidays are opportunities to honor the memories and traditions of our past, and create lifelong memories for the next generation. That must continue.”

“We are doing a Zoom Seder.”

“My thoughts drift back into the last century as I recount my father’s memories as a 3-year-old boy watching bodies lowered down from apartments in his tenement building due to the Spanish flu. That plague also passed. With the help of God, nothing will stop the human spirit from eventually beating this plague and eradicating the disease from the face of the earth.”

In The Book of Joy, the Archbishop and Dalai Lama also had a conversation about embodying compassion as a mark of joy. A compassionate concern for the well-being of others is the source of happiness, they agreed. All religious traditions that have developed over the last three thousand years have the same message — a message of love. Compassion is the essence of love. It can cure our pain, our brokenness. Compassion connects us to being kind. Compassion is essential for our survival.

We read a story this week about a nonprofit group that cares for those with developmental disabilities in a group home facility on Long Island. The facility is home to several dozen residents with severe disabilities ranging from cerebral palsy to autism. For many of them, discussions of physical distancing or hand washing are moot; they simply do not have the capacity to understand the need for such precautions. Last month, 10 residents were taken to the hospital within a 24 hour period. Just over two weeks later, 37 of the home’s 46 residents tested positive for the coronavirus. Two were dead; nine remained hospitalized. At least 8 members of the staff had tested positive as well.

“Forgive me if I get emotional,” the executive director of the home apologized, choking up. “People discount people with disabilities and presume they understand them when they don’t know them. They think their lives are not worth the same as yours or mine, and that’s just not true.”

Staff members were asked to report “with toothbrushes and pillows and hunker down,” the executive director said. “Normal was gone. Our staff are usually called direct service providers — all of a sudden they were lifted up to being essential health care workers … Everybody in this agency does saintly things every day.”

“In many cases they (the residents) can’t speak for themselves, or have anxiety issues, with nobody there who they know who can support them,” he said.

He grew emotional talking about the caregivers, whose pay starts at minimum wage. He has put up three large signs outside the residence saying, “Heroes Work Here.”

“We don’t hear very much about our staff, and they are first responders, they are heroes, and they need to be recognized,” he said. “If we fail, our staff, there’s no backup. We’re the end of the line.”

They are compassion in action.

Finally, in The Book of Joy, the Archbishop and the Dalai Lama spoke about generosity. Crises often bring out the very worst in people and the very best. We acknowledge the worst and lament what we see. We try to overcome the worst by intentionally seeking out the best and trying to emulate it in whatever ways we can.

“It is in giving that we receive,” agreed the two leaders. They expressed the hope that people would recognize that it is “when we are closed in on ourselves that we tend to be miserable. It is when we grow in a self-forgetfulness … we discover that we are filled with joy.”

We don’t know just how the owner of the Four Seasons Hotel in New York City may be feeling because of his recent generosity. But we certainly know how we felt joy when we read about what he did in late March to provide sanctuary and safety to medical professionals on the front lines — those saving the lives of their neighbors diagnosed with the coronavirus.

Normally, some rooms at the Four Seasons might cost $1,000 per night. After all, it’s aptly located on “Billionaires Row” on East 57th Street, between the famed Park and Madison Avenues, in Manhattan. But the five-star luxury hotel is now “housing for a high-risk subpopulation.”

At the entrance, two nurses, wearing N95 masks, take the temperatures of all guests, asking questions about symptoms over the past 72 hours and if they’ve washed their hands. Once inside, guests go straight to their rooms; there is no bar or restaurant. Elevators carry one passenger at a time; others must wait on taped Xs on the floor, placed six feet apart. Of the hotel’s 368 rooms, only 225 will have guests to limit crowding on the property.

Guests and hotel staff no longer interact. For check-in, keys are placed in envelopes on a table. Minibars have been taken out of guest rooms. Housekeeping is an amenity of the past; rooms are provided with extra linens and towels.

Dirty items are collected only after guests, who stay for a minimum of seven days, check out and the room has been fumigated. Beds no longer have decorative pillows, which can spread germs. On every nightstand is not a piece of chocolate from turndown service but a bottle of hand sanitizer.

If guests didn’t pass the health screening at the door, they would be escorted to a “red zone,” before being transported to a care facility. A mental health plan was also introduced.

Other New York City hotels are hosting medical professionals, too, but not necessarily for free. It’s been suggested that other vacant properties could follow the Four Seasons model soon. “I’ve gotten multiple calls from multiple hotels around this country and the world to replicate what we did,” he said. “Now we have a benchmark.”

Joy can be found when we are grateful, as we exhibit compassion, and through our generous spirits. There are so many ways to experience it.

What are you grateful for? How do you take the time to name the goodness in your life?

When do you model compassion? How do you show you care and feel for others?

What does generosity mean to you? How do you exhibit this spirit in your everyday life?

When you can answer those questions clearly and easily, you will be living a joyful life.

And isn’t that what all of us need and seek for all our days?

Even in the dangers, toil, and snares that life inevitably brings, joy can be found. Most especially ,it can be found in the struggles — the hard times. If there is an antidote to the uncertainty and anxiety we are feeling in this season, it can be found in living with joy, in the love we share and show each day.