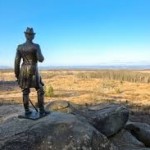 “To love another person is to see the face of God.”

“Love is God, and to die means that I, a particle of love, shall return to the general and eternal source.”

“In my deepest wound I saw your glory, and it dazzled me.”

We gazed out over the battlefield from the rocky pinnacle of Little Round Top, a pivotal site in the July1863 battle of Gettysburg. We couldn’t begin to grasp the magnitude of the three-day battle, where approximately 50,000 soldiers had lost their lives.

“Its hard to imagine the horrific human cost of what happened here,” Tom said, softly and solemnly. “War is awful. Hell.”

As we walked around the battlefield, our moods increasingly darkened, reflecting the gray of the day, as we talked about the current state of the world and our concerns about the future world in which our children and our children’s children will grow up. In a season when the news reports assaulted our senses with stories of relentless violence, terrorism and war, we entered into a serious discussion:

Gratefully, our moods began to brighten when we visited another historic spot, where we found greater hope and reassurance: the National Cemetery, where President Abraham Lincoln gave his most inspired speech – The Gettysburg Address. It astounds us that a speech a mere two minutes in length, only 278 words, could convey so much depth and grace, in such a poetic call for the cause of human dignity and equality. Standing in that cemetery, on that cold November day, warmed our souls and gave us encouragement – that in the midst of terrible grief and loss there could still be light piercing the darkness.

That place of remembrance, that place of darkness – and of light – reminds us of a mother and father we know and respect, who continue to find light amidst the darkness of grief that unexpectedly intruded on their lives. They lost their son, at age 53, to a cancer suddenly diagnosed, which just as suddenly took away his life just eight days later.

He was a father of two sons, a Philadelphia baseball and football fan, a writer, book collector and poet. He was also an avid civil war re-enactor, for 15 years, a member of the Sons’ of Union Veterans, a great grandson of a Civil War soldier. He was buried in a plot next to his great grandfather, after whom he patterned his life.

In the winter of his 38th year, he wrote about his avocational passion:

The lingering essence of Gettysburg strong within me – as always, strong and magnetic with the ultimate mix of bravado and sadness, glory and pain, ambition and defeat, feverish struggle and stark silence …

The harsh cold of The Field still swirls about me …

The icy snow of The Field still crunches beneath my feet …

The allure of The Field is the striving of our souls to overcome the impossible odds against our very lives – and the hope that love and peace endures, even beyond the end of our mortality …

The Field is forever, and we with it …

He had found his place in life, his place of immortality, where his spirit would live on. Two months later, in winter’s last days, he wrote this to his sons:

If you read this – and I am gone – and, for some reason, you wish to see or hear or feel me, GO TO GETTYSBURG …

Go to Gettysburg, indeed. That’s exactly what his family does every year on his December birthday. They go to Gettysburg to remember his life by sharing a meal at a historic restaurant, the town’s oldest surviving building. Built 87 years before Lincoln delivered his Gettysburg Address, the building is within close enough proximity for its residents to have watched and listened to Lincoln’s speech from a second floor balcony.

His dad and his younger son have taken on his re-enacting avocation too. They “serve” in the same unit that he did. A retired pastor, his dad personifies the role of a chaplain who actually lived and served in the unit during the war. It’s their way of remembering and honoring his life and his love, together.

“Oh, Loneliness” is one of his poems. He shared it in his book – Sweet Fields of Euphoria: Pappy’s Faith – a tribute to his grandfather, published when he was 22. What was on his heart as he wrote, reads, in part:

how often you smother

the spark of life

and misery throughout long nights …

you failed with him,

he shrugged you off to live for Life;

with God’s redeeming grace in hand,

he breathed the sparkling air with a smile.

The body you attacked with pain

repelled your ache with jaunty steps

retained by love and no more asked,

He sang into your open jaws,

with confident and heartened trust,

and as your sought to quell his praise,

the chorus swelled and overcame.

your sorrow could not swallow him –

for peaceful light glared in your eyes

and blinded dark your slightly gloom …

In their home, his parents remember, too, with a small table in their living room, filled with various mementos representing his life – ribbons commemorating his many re-enactments, a candle, a beautiful pencil drawing of his face, a stocking monkey like the one he played with and that gave him comfort as a child, a cross, a box of LifeSavers, his favorite, and photos of him. He was a historian and a dreamer. The table reflects that.

“He was such a nut!” remembers his mother.   “He always had us laughing. He was always so entertaining.”

He had so many friends, especially in the re-enactment community. He loved people. Other than the relative shortness of his life, the only sad thing, they declare, was the trouble he had staying married. He had three ex-wives and was survived by a fiancé, eternally optimistic. All four of them sat next to one another and spoke at his funeral – lovingly, about him.   Their presence and words about him conveyed much about his character and the friendly and respectful terms on which he was able to remain with each of them.

He didn’t talk much about his faith in life. But growing up, he always supported those who were “down and out”, his parents shared:

“He took up for kids who no one else did. He was always bringing someone home who needed a meal, a bath or a place to sleep.”

His family surrounded him as he died. It was peaceful. He didn’t cry out. It was quiet. His father remembers “his beautiful head of hair”, the last thing he saw as his son was placed into the body bag.

It helps in the healing to face the grief.

So, too, it helps to remember how he lived out his faith – by the way he treated the people around him – with generosity and respect – and by the poetry he composed – filled with words of grace and compassion for others’ circumstances and struggles.

His oldest son has a room in his home dedicated to the Civil War and his dad. Like his dad, he is a historian. He remembers so many details about the war and its time in history.   Remembering now is an even more important link to his dad. After his dad’s passing, he published a book of poems that his dad wrote, pouring through thousands of pages of his journals to cull forth those that best represented him. His son considers it his dad’s final gift to the world. He shared these words as he introduced his father’s thoughts and musings:

“How many times in our own lives have we not shown public affection to someone … or been afraid of human contact because it might be deemed improper … my father hugged and kissed no matter the environment.

“My father knew love and lived love – for God was his judge and not man.

“And my father believed all of the world’s problems and those of his own could be solved by love if only everyone was willing to let down their guard and pour forth love.

“To my Father, love was not a word spoken to another or the result of a good deed one for another. Love to my father was a great gift from God meant to be lived every day and it was the singular purpose for his life.

“A journal entry he made in 1977 (at age 21) speaks to his belief in love and the power it can produce when shared with others. Let your guard down; show and tell others you care and are committed to their well-being. Make yourself available to help others in spite of human nature which can cause us to build walls between us and others when we should be building bridges.”

Here are his dad’s words on the power of love:

As the wandering people of Israel long ago, we too are wandering – in search of a purpose – a good life, success, happiness. And many times we stop and wonder: “What is my purpose here? What do I believe in? Who am I?

We are in conflict in these hurry-up times. We want to live a life in dedication to God and his creation, but we are tangled within the framework of our daily lives – the 20thCentury Masquerade Party.

Automobiles. TV sets. Stereos. Microwave ovens. Things! We all have things – want things – need things or have come to believe we need them. We cannot find a common ground with God’s world and today’s living. Or can we?

The common ground is, simply, love.

‘Come on’, I hear people sighing, ‘you can’t simplify the problems of the world …

True. Fact is fact. But is fact always truth?

The Bible holds many truths – easily stated, easily understood – and love is the basis of all of them.

To remember. A man who lived with passion and compassion. A man who made many friends, who connected with people whom others often couldn’t or wouldn’t. A man who understood the power of love and unashamedly let that power propel his life.

To remember is to grieve.

To remember is to heal.

To remember is to share a legacy of love, a legacy that, according to the Apostle Paul, never ends.

As we stood on the summit of Gettysburg’s Little Round Top and peered out over the vast countryside once saturated with the blood of maimed, dead and dying bodies, we remembered too. We remembered the horrific toll of that war. As we walked reverently through the National Cemetery, among the more than 3,500 graves of the Union soldiers buried there, we remembered the beautiful and hallowed poetry spoken by Abraham Lincoln over 150 years ago:

and the noble promise that the President’s words conveyed.

We remember a family, intimately connected to that hallowed ground through a beloved son they have lost. Darkness. And we remember, too, how they memorialize him. Light.

His legacy is simply one of love. That love is the light piercing the darkness in their souls, the darkness from their deepest wound – his loss, coming all too soon. Yet in that loss they see his love enduring and living on. They see its glory and its power and it sustains them. It redeems their pain.