Michael and Tom    Blog    May 21, 2012  |  0
If we have no peace, it is because we have forgotten that we belong to each other.
Mother Teresa
Every time we get together we start by sharing-about what we did the night before-sharing the frustrations or challenges we may have encountered, sharing about the things for which we are grateful, sharing about the conversations we have had or the ways in which we have been used to be a source of strength and encouragement for others.  We so often discover and are reminded that so many of all of these things are the same for us.  So many of our feelings, and thoughts, and reactions are shared without us even knowing about it until we talk.  We are connected to one another in so many ways.  We know that to make our partnership work we cannot forget that we belong to each other.  We know that the same is true in our marriages, we know the same is true in our roles as fathers and sons and as brothers, we know the same is true as counselors, as friends, and as leaders. 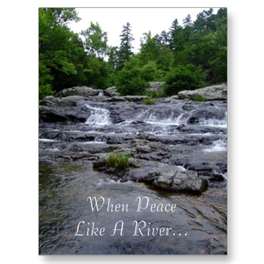 Growing up in a church environment as well as both of us having worked in one, we both resonated strongly with the words of the poem and hymn ‘It Is Well With My Soul’.  This hymn was written in 1873 by H.G. Spafford, a successful Chicago lawyer, after several traumatic events in his life. The first was the death of his only son at the age of four, shortly followed by the Great Chicago Fire which ruined him financially. In 1873, he had planned to travel to Europe with his family and sent them ahead while he was delayed on business. While crossing the Atlantic, their ship sank rapidly after a collision with another sea vessel, and all four of Spafford’s daughters died.  His wife was the only family member to survive.  Shortly afterwards, even with chaos and despair consuming him, Spafford wrote these famous words:
When peace like a river, attendeth my way,
When sorrows like sea billows roll;
Whatever my lot, Thou hast taught me to say,
It is well, it is well, with my soul.
This morning, as we read Spafford’s words and recall the story behind them, we are haunted by them.  How could someone like Spafford, amidst so much devastation and loss and brokenness find so much peace?   How could he ever feel any remnant of hope in his circumstances?  How could he possible write that anything was “well with his soul”?
The testimonies of those who have suffered and lost, of those who have been burdened and beaten down, of those who have faced fear and countless demons, and yet, who have found a way to rise above and live beyond all that has come, can be of true hope and assurance to us through our own struggles and grief.
Life is a struggle for which there are not enough words to describe all the feelings, fears, frustrations and moments fraught with anxiety that it can often bring. Our challenges certainly bring a new perception of life and its meaning.  Sometimes those challenges are positive and good.  Sometimes those challenges break us apart and embitter us in terrible ways.  But they do not have to.  Our faith in something beyond ourselves reminds us, over and over again, how we can be lifted up, carried through, delivered to a better life.  Our faith that there are others going through or who have gone through similar life challenges connects us to remind us that we are not alone; that strength can be found in one another; that by simply sharing our burdens we realize our burdens don’t have to be so heavy, because we aren’t carrying them by ourselves.
Last week, I (Tom), met with a family who has been through so much heartache, disappointment, and anguish.  They have had physical, emotional, and spiritual pain all at one time.  They have had major life crises arise, causing them to shoulder far more than any one family should.  It almost seems unfair.  Yet, in meeting face to face and being given the opportunity to unload their burdens, this family has been able to find incredible hope and strength in their incredibly hopeless situation.  Leaving the conversation, the mom and wife in the family was able to declare, like Spafford declared over a century ago: “It is well with (our) soul”.
There is nothing that brings us greater joy than to be used in this way.  We feel that we have been given a gift of creating a sacred space- a safe place, for people to share, for people to unload, for people have their burdens begin to be lifted and to know that they aren’t alone.  And ultimately, for peace to be found, a peace which transcends our understanding.