Out of the Darkess, Into the Light 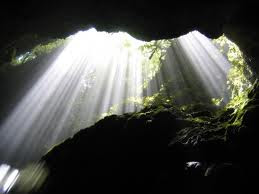 Every one of us is called upon, probably many times, to start a new life. A frightening diagnosis, a marriage, a move, loss of a job or a limb or a loved one, a graduation, bringing a new baby home: it’s impossible to think at first how this all will be possible. Eventually, what moves it all forward is the subterranean ebb and flow of being alive among the living

Several years ago Tom took a group of teenagers through one of the largest natural caves in the world – Kentucky’s Mammoth Cave National Park. At one point during the tour, deep inside the earth, the guide asked everyone in the group to shut off their lanterns. The room fell instantly dark, pitch dark — darker than any darkness the group had ever experienced before. Those few moments of utter darkness caused an overwhelming feeling of anxiousness, fear, and uncertainty within the group. Everyone was greatly relieved when the guide told them to turn their lights back on — quickly illuminating their way — and diminishing their anxiety — once again.

We want to ask you a question today: How well did you sleep last night? We ask this question because last night Tom had a very restless night, one of disruptive sleep. At 3:00 a.m. his two- year old son woke up screaming and needed to be comforted. After settling his son and getting him back to sleep, Tom himself soon found himself needing comfort. His mind started racing — as it filled with the various ways his life was starting over again:

The reality of having twins bore down on him. Suddenly, in an instant, he realized, his life was changing dramatically. Not only are two more children on the way, but one of his family’s cars died a sudden death last week and a new one (a van) is sorely needed. The house in which they live will soon be much too small and inadequate and a new home needs to be found very soon. The added risks that multiple births bring to a mother’s health and well-being crept in as Tom lay in the darkness. The start of this new non-profit counseling and spiritual guidance service and the uncertainy of creating financial viability weighed ever heavily.

In those dark and lonely moments when cold sweats run rampant and the mind takes us to places where light doesn’t shine, hope is hard to be found. And that is a difficult place in which to find ourselves.

Ever have one of those restless nights? A lot of those nights? That subterranean ebb and flow in which we are plunged into the deep darkness where anxiety, fear, and isolation reign?

The fact is, we all have those nights, those moments, those deep dark pits of despair, in which we can’t quite seem to catch our breath or to find our way out. But we need to be reminded that there is still hope, that light can shine again. Tom found that to be true by moving back into the life of the living after the dark night ended:

A beautiful sunrise. The brilliant yellow daffodils blooming in gardens, coming to life again! The sight of his son smiling and laughing with childlike abandon, forgetting his terror last night. A conversation in which he was openly and freely able to share his feelings and fears about his quickly changing life circumstances, without judgment or embarassment. Receiving an unexpected cash reimbursement for his broken-down car. Sharing lunch outside while basking in the spectacular and unseasonably warm weather. Visiting a new prospective house for his exponentially growing family. Making significant progress on essentials for the non-profit, such as reaching out to new and potential funders and gaining significant enhancements to our website.

Like Tom’s group realized in Mammoth Cave, darkness – and fear – don’t have to last forever. As much as we feel as if we are alone, helpless, unable to see anything but the darkness in front of us, when we realize that we are in this life together and we open ourselves to the support and encouragement of others, things can begin to change. When we understand that when we shine our lights together – the lights of love, of affirmation, of forgiveness, of grace and of compassion – we can begin to see our way through once more and, ultimately, we can emerge out of the subterranean depths of anxiety and despair and walk into the light – and hope and new life – again.