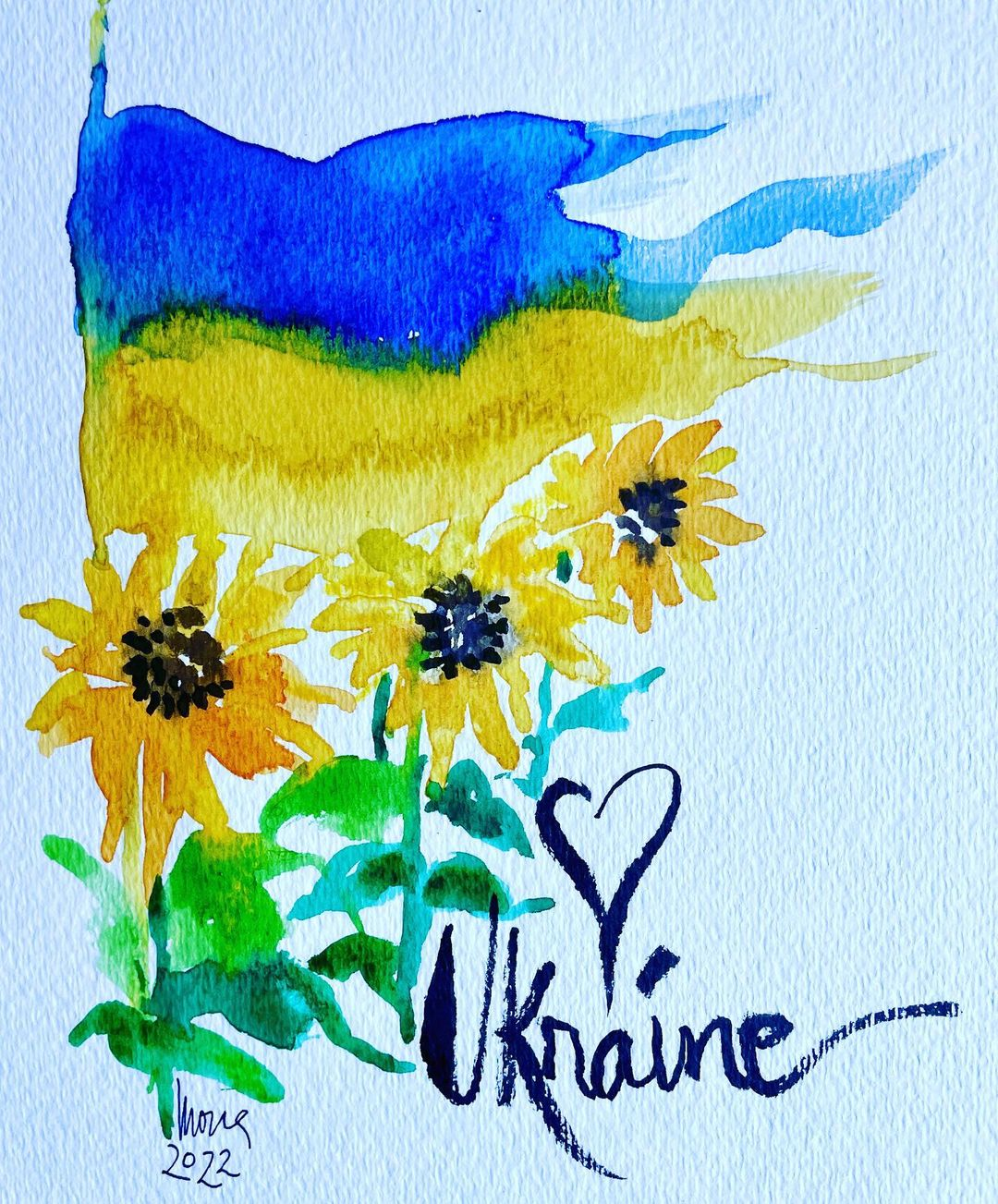 After the fall of the Berlin Wall and the opening of the Iron Curtain, Ukrainians learned a long-held evil truth. Outside of the capital city of Kyiv, the quiet woods held thousands of bodies of tortured and murdered political prisoners from the Stalinist era. The stunning and bright autumn day could not blunt the ugly and dark story the forest held for decades.

Through the voice of the interpreter, we learned that dissidents, academics, and those who were accused of being enemies of the state would suddenly disappear, never to be seen or heard from again. Their families, colleagues, and neighbors never knew what had happened to them. They were simply non-existent. Systematically, brutally, suddenly, they were taken and executed. They mysteriously vanished, as if they had never existed.

Our small group of American visitors, which included my 16-year-old son, David, were stunned by what we heard. Stopped cold by the story. A quiet reverence fell over us as we realized we were walking on hallowed, blood-stained ground. There was little to say, but much to process as we listened, rapt in gruesome attention.

Of all the memories of my half-dozen humanitarian trips to Ukraine in the late 1990’s and early 2000’s, after the country was opened to freedom, this memory claims its hold on me the most. It’s an evil claim. A claim that reminds me of humanity’s most egregious and hateful crimes against one another.

A killing field holding a once terrible secret.

That memory is vivid to me today as I write, and as I read and watch reports of what is happening in Ukraine. The unprovoked invasion of a sovereign nation—of proud and purposeful people—by a former occupier nation, is leading to more potential killing fields in the country’s 1,000+-year history.

It is a history of countless other such invasions, of wars, of annihilation, of torture, of famine, of poverty, of unrealized dreams, of thwarted potential. Few countries have shouldered and still remained steadfast against such devastating losses and blows.

I remember on that same trip, being looked in the eye and asked plaintively,

“What has Ukraine done to deserve such a history? Why does God punish us in this terrible way?”

The mournful questions required a consequential answer. To this day I fear I did not provide a consequential response. Maybe it was the result of the vodka-fueled dinner that our hosts prepared that I couldn’t gather enough vital thoughts to address the very profound queries. But even more, it was the fact that I had no words, no idea, why any people would deserve such horror and violence and pain.

I don’t believe in a God who does those things to people, innocent people who simply want to live their lives and care for those they love in peace. Why does any of this happen to any of us who are only trying to do our best in an imperfect yet beautiful world? I only wish I knew. But one thing I do firmly know is that this is not God’s doing, God’s will, God’s punishment on a terrible people.

Over the past week, I have been corresponding with seven Ukrainian families, reminding them that they are loved and not forgotten. Giving them the safety to tell their stories, to voice their hopes and fears. One family has written, wanting us to know:

All of Ukraine has risen to this war … There are many casualties among the civilian populations … Many destructions of houses. Many citizens were injured … Pray for peace in Ukraine. May there always be peace in your hearts. We love you.

Ukrainians are beautiful people who have contributed much beauty to the world. Their art, their music, their dance, their culture, their architecture, their literature, their passionate love, are all responses to the world’s goodness and beauty, as well as to its evil, its unfairness, its violence, its sorrow, and its hatred. Their contributions shine a light to diminish the darkness of the horrors. Their contributions only enhance the beauty that is already here.

Today, the people of Ukraine deserve our love, our respect, our aid, our empathy, and our working for peace. They are sovereign people who deserve these gifts that we all want—and deserve. They, under the courageous and inspiring leadership of President Volodymyr Zelenskyy, are standing strong in the midst of a relentless and terrible barrage.

May there be no new killing fields in their midst. May their strength and courage, their contributions and love be allowed to shine through—as free people—for all the world to celebrate and to see.

In the days since this original blog above was written by Michael, we have been in regular touch via email and Facebook private messaging with several families from Ukraine.

It has been a profound and sacred experience to connect with old friends there, to read and know their stories, to allow them to be heard, to help them to know that the world is listening to the horrors around them, and to remind them that the world knows and cares about the atrocities that threaten their well-being and their very existence.

We hold their stories deeply within our hearts—gently, respectfully, compassionately.

One man shares a message from a friend of his in the besieged city of Mariupo:

Good evening friends! … It won’t even occur to you what’s going on here … My family and I are in the church on the left bank … By the grace of God, we are alive … The city is simply wiped off the face of the earth … It is completely destroyed, there are no electricians, all the wires on the ground, there is no gas, the gas pipeline is blown up, people go out on stones on the street to cook their own food, there is no water … the streets are hungry, shops are smashed and looted, hail is fired, cannons, aircraft, bombs just fall around a few meters from the church, … We wanted to leave with my family when there was a corridor, the car immediately broke down, … Even if everything ends, people have nowhere to live … whole entrances burned out, there are holes through and through in the houses, everything is broken! Schools are broken … It is written do not be horrified, this is not the end! But it’s very scary … The corpses lie on the streets, they don’t have time to collect them, or maybe they don’t collect them … It’s very difficult! … yesterday for the first time I washed the children … You can apply it from the sea, but there is nothing to heat, they cook food on generators, they save on everything … We don’t know how to continue to live…

Following that message, we had a Zoom conversation with two other friends who evacuated from the capital city, Kyiv, to the—for now—“safer” rural Carpathian Mountains in the western part of the country. The father spoke in Ukrainian as his daughter interpreted his eloquent words into English.  By turns reminiscent, humorous, and sad, they both expressed a peace about feeling safer. But they fear that it may not be safer for long, as they recounted hearing shelling nearby just that morning. They spoke of how they left Kyiv, hurriedly, with little time to bring adequate clothing with them, and how they were not certain what would be left in the city if they were ever able to return. They cried at the devastation taking place, the death of innocent civilians, the death of life as they had come to know it over the last 30 years. They cried tears of immense gratitude for the time we shared with them. They told us that we were the only people outside the family that the father had talked to since they fled the capital. He is incredibly lonely there. Knowing him for years, he is a gregarious, very relational man. The isolation, compounded by fear and grief at what is happening to their beloved nation, has taken its toll. The 75 minutes shared with us were a lifeline to them both, the father, especially, who declared:

Even though we spoke about the war and its destruction, speaking with you, telling our story, connecting over such a distance physically, for this time together you helped us to feel better, to feel hope, to know that we are loved.

After we reluctantly said goodbye, promising that we would connect in this way again whenever we all could, we both felt such a complex mixture of sadness at hearing their frightful story, privilege at being invited into their story and trusted to be sensitive with its pain, hopeful that our listening was a balm for the grief of all that they had lost and for all that they still could lose, burdened by the unrelentingly bad news this warring siege bombards the world with, and grateful to connect so intimately with two courageous people who represent a nation of equally courageous people, who believe that what is right and good will ultimately prevail.

It is this kind of listening that we at Someone To Tell It To do every day, entering into the depths of others’ lives—in times of loss, loneliness, lingering fears, and—in this instance—in times of war and all the terrors war brings. We’ve found a way to do it virtually: Through Zoom, email, texting, Messenger, Facebook, the phone, and other apps that can connect us when we can’t be with someone face-to-face. It may not be as good as being together, but it works when we are committed and free from distractions.

We left that virtual conversation being convinced more than ever before that when we listen with empathy, with compassion, with intention, with presence, and with love, the strength to persevere, the inspiration to do what seems impossible, and the gift of knowing that we are not alone in our struggles, is given and received—even 5,000 miles away.

Stay up to date and join our compassionate listening community! Sign up for our newsletter today.