New Suits, Bow Ties and “Standing With” Our Friends 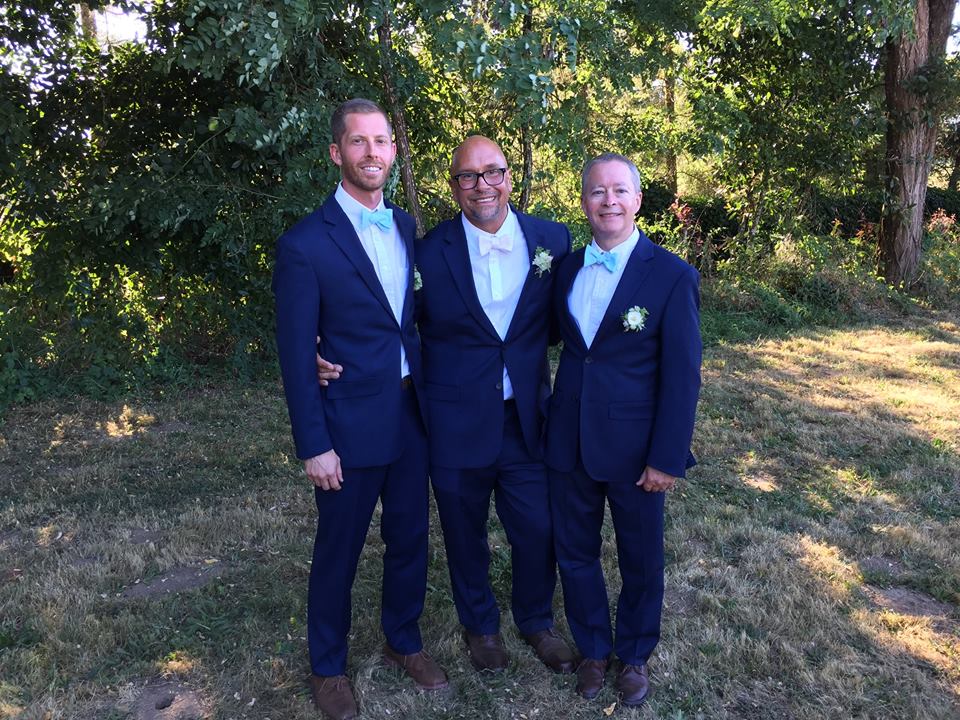 “Right after the new year began, my wife of 14 years shared that she wasn’t sure if she wanted to continue with our marriage. She informed me that she “needed space” to sort through her feelings. We had just experienced a season of many difficulties: my battle with cancer in 2011; my mom’s recent battle with breast cancer; her mom’s passing away in the summer of 2013; the death of my dad last month; and to add to all that, I found one of the persons I am working with – dead – in his home two weeks ago.

“My wife’s request for distance shocked me. I was absolutely devastated.

“During the next few weeks, I experienced a numbness that is indescribable. I knew that our marriage had been struggling, but my ability to see “reality” was enveloped in clouds of denial. Sleeplessness, overwhelming feelings of abandonment, betrayal, and rejection created a spiral downward into an abyss of severe depression. I was truly spiritually, physically, and emotionally bankrupt. My life was in total collapse and I felt severely hopeless.”
His message, heartbreaking, moved us to respond as soon as we could. The enormity of his losses, the threats to his well-being, exposed a man in deep distress:

“Thank you so much for reaching out to us. It took an incredible amount of courage and we are proud of you for taking the first step…”

He replied immediately:
“I am beating myself up pretty bad. Am very hurt – feeling betrayed, sad, anxious, fearful … I don’t even know how to continue the grieving process after losing my dad … Pain. Numb. Confusion. Denial.”

He was able to meet us the following week on a Friday, at an area coffee shop. Frigid outside, gray and overcast, darkness already descending in the late afternoon sky, the atmosphere mirrored his emotions. The man who walked in looked like a boxer in the 9th round of a fight, as if he had been totally beaten up and knocked out. An indescribable weight was bearing down on him. His appearance suggested someone who had everything, figuratively everything, in his life “hit the fan”- and it had. Our immediate response was to each give him the giant hug we sensed he needed.

He voiced what his wounded heart was feeling. We tried to simply enter into the horrendous confusion and loss with him. His words were few, and sometimes absent altogether. Words were often desperately inadequate to convey the devastation, the bottomless chasm of betrayal he was feeling. There were many moments in which the three of us simply sat, not speaking, still, in solidarity with him.

We continued meeting with him nearly every Friday at the same coffee shop, at the same time, through the winter and into the spring. We sent him regular email and text messages reminding him he was loved. We wanted him to know there was more to his life than the wreckage he was experiencing. But for the longest time he wasn’t ready. Our conversations were acutely intense because his agony and sorrow were so great to bear.

We also prayed for him. Even with our prayers, we often felt as if we weren’t helping him at all.

Then, seemingly out of nowhere, a new day appeared to be dawning. As winter turned into spring and spring into summer his empty and deflated heart started to show signs of filling up again.

He decided to take a new job in Salem, Oregon, with a ministry for men experiencing homelessness. We witnessed a new and brighter light shining all around him. We could see it in his face and we could sense it in his demeanor. God was rescuing him. His life was changing. It was beginning to grow better.

Today, three and a half years since our first meeting, his life has changed even more.

Two weeks after he arrived in his new state and at his new job he visited a new church and quietly slipped into a seat. Before the service began a friendly woman, about his age, sat down next to him in the area in which she always sat. They greeted one another and continued a conversation following the service. Learning he was quite new to the area, she invited him to have coffee at a place nearby. He accepted. They kept having coffee and had hundreds more conversations. Daily. Serious. Emotionally intimate. She, too, had great trauma and disruption in her life. Her husband was killed while driving, leaving her a single mom with three adolescent children. The past seven years had been lonely; starting over with no partner, raising the children by herself was an immense responsibility.

They became two wounded souls slowly beginning to help heal one another. They fell in love.

Keeping us apprised of developments in their relationship, he introduced us to her. Many conversations between the four of us followed, as they processed the evolution of their relationship. They visited us on the east coast. After their life changing losses, the fear of commitment loomed large, especially for him. Yet the more we listened, the more we were convinced they were perfect for each other. Rarely do we tell others what to do, knowing it’s best for us all to discern and embrace the answers ourselves. But we broke our own rule and told them they needed to be together.
Seven weeks ago a series of text messages came from him:

“Good evening, gents, just a quick update – actually, a prayer request … we had some serious chats this weekend. We are discussing what moving towards marriage looks like!!!!”
“… I’m going to ask her officially tomorrow. Will keep you posted …”
“… Hey guys! Miracle!!! She said yes!!!!! Any chance you guys can be my Best Men on 7/22? Thanks for everything. NEVER dreamed in a million years that I would see myself as the most fortunate man on Earth – like today. We both love you.”

Yes, God is rescuing – and redeeming – him. We accepted his touching invitation to be his best men. So, this past weekend we stood next to him in the yard of the bride’s home as she and he made their vows before a standing room only congregation of 250 family members and friends in a ceremony that was poignant and redemptive, beautiful in every way.
It took a community to lift them to this weekend’s celebration of their love. A community providing encouragement, patience, prayer, reassurance and a few well-placed verbal prods to remind him that he was deserving of love – and a new wife and life – again.

It takes a community that clothes each of us in love to show us how love can sustain and redeem us. Their community accompanied them through it all – the losses, the devastation, the loneliness – and joined together to witness the fruit of such love over the weekend.

A sacred moment of celebration.

We couldn’t help but think about being clothed in love as we prepared for the wedding, dressed in our new suits matching the groom’s, how it took a community to get us looking our best for the service. New suits were gifted to us by the bride and groom. Bow ties were handmade by the bride’s 18-year old daughter, a fashion student and design prodigy. The groom and we had no idea how tie real bow ties. The only kind any of us had ever worn was the clip on variety, as we dressed in our childhood Easter finest. After dozens of attempts, after watching several YouTube how-to videos, after a half dozen different pairs of hands fussing at each of our necks, and with cameras whirring and bystanders chuckling and bemused by each entertaining, failed effort, our ties were finally camera and wedding worthy. We couldn’t possibly have gotten those bows tied without the community support. It’s a small symbol; but an apt one.

The thing is, we all need accompaniers, for the small, seemingly insignificant and especially for the large, momentous moments of our lives. We need them for everything in between, as well.

Professor and best selling author Brené Brown has written, “(We) should be more like a midwife than an epidural”. In writing it she is describing a way of caring for others largely avoided in communities in our lifetimes. Very few of us like pain. Most of us want to mask it, fix it, make it disappear. Much like an epidural given to a mother in the midst of giving birth, we want to numb what hurts and take the feeling away.”

Instead, Dr. Brown asserts, we would be much more helpful and supportive, especially emotionally and spiritually, if we can accompany one another through our heartache and hurt, sitting in it with each other, not masking it, avoiding it or pretending it’s not there at all.

This weekend we were utterly privileged to accompany our very dear friends, by standing with them in the biggest public moment of their lives together. After all we’ve shared with them, we wouldn’t have missed that moment for the world.
…
You can read more of the story in our new book – “Someone To Tell It To: Moved with Compassion” – to be published on October 5.
Here’s a video link to our friends’ telling about Someone To Tell It To’s accompanying work in their lives.