It Matters to This One 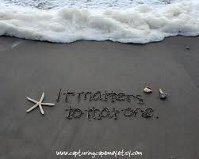 We’ve heard this story many times over the years and perhaps you have too. But we believe that we need to be reminded of its message often, a message that bears repeating over and over again:


A young girl was walking along a beach upon which thousands of starfish had been washed up during a terrible storm. When she came to each starfish, she would pick it up, and throw it back into the ocean. People watched her with amusement.

She had been doing this for some time when a man approached her and said, “Little girl, why are you doing this? Look at this beach! You can’t save all these starfish. You can’t begin to make a difference!”

The girl seemed crushed, suddenly deflated. But after a few moments, she bent down, picked up another starfish, and hurled it as far as she could into the ocean. Then she looked up at the man and replied,

“Well, I made a difference to that one!”

(adapted from the Star Thrower by Loren C. Eiseley)


We cannot underestimate the power that we hold in our hands to touch someone’s life, to change someone’s mind for the positive, or to make a healing impact on a circumstance today – right now. Even what seems like a symbolic act has the power to inspire others to act, and to cause a lasting impact on others’ lives, often in ways we may never truly and fully know.

As a society we are so focused on results, on numbers – how many lives did you touch, how much fruit did you bear, how much money did you make? It would easy for us to doubt that we are making a difference. That phone call we take. That impromptu conversation we have with someone in passing. That time we listened to someone’s struggles, their story. There is a tendancy to only see or value that which produces the most externally. But we know and believe that there are deeper results that can be produced – results that are not as outwardly tangible, but internally are deeply significant and lasting. Results that impact lives and hearts and spirits in ways that cannot be measured, recorded, tallied or formed into statistics.

Both of us, in the last few weeks, we have been contacted by people we haven’t heard from in months, years and even in more than a decade. We’ve had emails and calls expressing gratitude and appreciation for what we imagined were minimal or passing roles we’ve played in their lives. Yet, as we learn, what seemed to us as a fleeting impact, was so much more to those who have reached out to us. Something we said or something we did or some way we interacted with them made a deeper and more lasting impression than we have ever thought. They remind us that we actually did make a difference in their lives, that we mattered to them because they saw that they mattered to us.

When any of us take the time to reach out to others we often don’t know how important our time, our listening ear, our attention to their circumstances, can be. When we show someone that they matter, no matter how seemingly small our care may seem to us, we make an impact that can last a lifetime and that will produce results – love, grace, compassion, integrity, courage, character and forgiveness – that can never be measured, because their impact is much too great.