If We Can Simply Listen 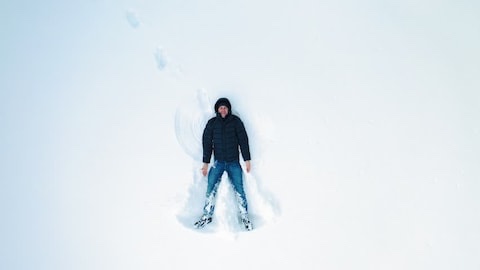 Snow angels and one more moment to live

His home on Florida’s warm and sunny coast was far away that cold, snowy January morning.  A fresh and gleaming six-inch snowfall had covered the Maryland countryside the night before.  Snow hung from tree limbs and they shone brilliantly in the piercing sunlight after the storm clouds had drifted far away.  The groundcover was still pristine, undisturbed yet by plows or snowblowers or footprints.

We had shared the past few days with him at a retreat for those living with cancer, where we had presented our work.  He was quiet and soft-spoken. His diagnosis rendered him weaker and subdued. He was only 44 years of age, and unaware – or at least we were – that he had only a few more months to live.

January and its accompanying cold and snow, such as we’ve had here in Pennsylvania this week, remind us of him.

We remember that he hadn’t seen snow since he was a child.  During dinner the night before he had become animated for the first time that week.  The snow absolutely enchanted him. It was so refreshing and encouraging to witness. He was boyishly excited to see the snow, feel it on his face, and delight in its beauty.  Yet, the days we were together were cold, frigid. He was so un-used to those temperatures. They challenged him; he was physically uncomfortable. We can only imagine how anxious he was to leave the wintery northeast to return to Florida’s more welcoming air and sun.

But before he had to leave, he had an idea.  And it was a deceptively simple act that would become our strongest memory from the retreat.

He announced that he wanted to do something he had never done before – lie in the snow and make a snow angel.  His childlike wonder at the miracle of the snow transported him back to a simpler time, an innocent time when disease did not threaten and his future was still open and bright.

We loved his idea!

We gently helped him down into an undefiled cushion of snow, and he slowly, gingerly spread his arms and legs to create the angel.  And as he did, for those moments, he was free. He was young. He was not in pain. He was not weak.

He laughed and laughed, loudly and exuberantly, from somewhere deep down within him.  A moment of silliness was in his life again. It was a deeply needed moment of childlike fun, full of relief and release—for him and for all those living with life-threatening illnesses.  His laughter transported us. We shared and delighted in his joy.

Sadly, a few months later he was gone.  His life ended, too soon. But his moment of joy, of laughter, of silliness, of release, lives on.

That afternoon, as we were driving back to Pennsylvania, a song came on the radio and brought tears.  It was Tim McGraw’s classic anthem, “Live Like You Were Dying.”

The song is about a man also in his early forties, who receives a tough diagnosis, one that “stops him on a dime.”  It causes him to reexamine his life, and instead of wallowing in despair, he feels compelled to appreciate and savor the time that he might have left.  He decides to embrace the fullness of life, and most especially, he sings –

“And I loved deeper, and I spoke sweeter,
And I gave forgiveness I’d been denying …”
… “Someday, I hope you get the chance, to live like you were dying.”

It might not have been skydiving, Rocky Mountain climbing, or bull riding, as Tim McGraw sang about.  But that frail snow angel was our friend’s moment to live. He was dying, but the new fallen snow that morning gave him one more moment to approach his life without regret.

One more moment to laugh.

One more moment to live.

We first wrote a version of this story in 2014, in our book, Someone To Tell It To: Sharing Life’s Journey.  Every January, the month in which the story takes place, we think of it and the gentle man who inspired it.

As every year ends and as another one begins, we take vital time to reflect on life’s journey and the memories and experiences we share.  Along the way are life-affirming, life-giving stories of those who remind us of life’s beauty, life’s intent, life’s meaning. This story of a simple, child-like act by a man who determined to live as he was dying, always brings joy to us and helps to keep us grounded in what is important and what is really essential to have a good life.

These are some of the gifts that bring hope, that drive away darkness – if simply for a few moments, that help us to see beyond our troubles, fears, and doubts.

We wish for you much time to laugh in this new year.  Much time to linger where beauty overwhelms. Much time to listen to the voice of love that we believe speaks to us more often that we make time to hear.

So, if we can simply listen, perhaps this year will be filled with our own versions of snow angels, whatever they may be, just waiting to cushion us in laughter, beauty, and love.