I Have the Weight of the World on My Shoulders 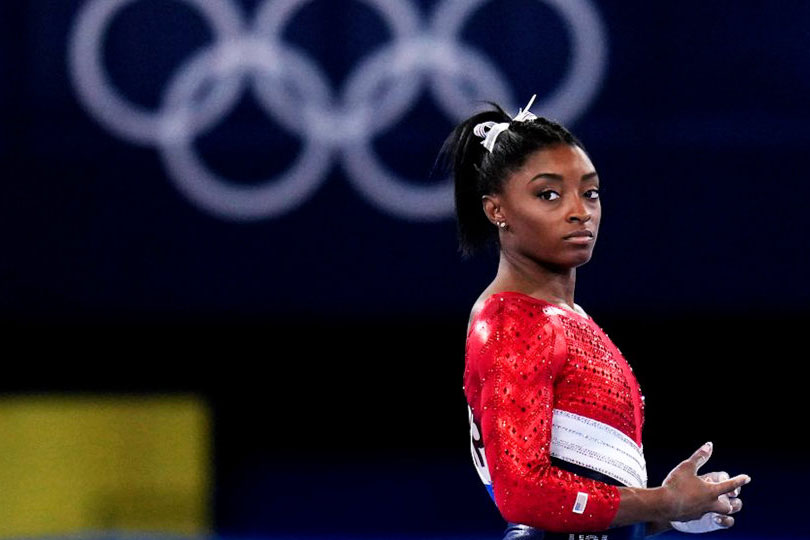 Simone Biles arrived in Tokyo as the biggest name in the Olympic Games.

She is now not only the biggest name, but has generated the most headlines and has the brightest spotlight focused on her and her decisions to withdraw from gymnastics competitions she was favored and expected to win.

“I have the weight of the world on my shoulders,” she admitted as she entered the Games. As the most decorated American gymnast ever — and perhaps the greatest gymnast the world has witnessed — the weight of expectations is staggering and profound.

Many believe she showed incredible courage and strength in stepping aside when she felt she couldn’t go on.

“A moment of undeniable strength from @simone_biles,” wrote French soccer player Paul Pogba. “We always focus on the physical aspect of health but the mental aspect is just as important. When you take care of both, you will flourish in life!”

Her sponsors, including Athleta and Visa, are lauding her decision to put her mental health first and withdraw from the gymnastics team competition during the Olympics.

U.S. Senator Tim Scott, of South Carolina, tweeted: “We have witnessed resilience & lion-heartedness in its rare form. Let’s not forget, @Simone_Biles is the most decorated American gymnast…ever.”

Former swimmer Michael Phelps, the most decorated Olympian of all time and one who has been very public with his own mental health challenges, spoke out in her defense in an interview, saying, “The Olympics is overwhelming…We need someone who we can trust, somebody who can let us be ourselves and listen, allow us to become vulnerable, somebody who’s not going to try and fix us. We carry a lot of things, a lot of weight on our shoulders. And it’s a challenge, especially when we have the lights on us and all these expectations thrown on top of us…It breaks my heart.”

Many believe that the choice to drop out was brave and could open the door for other athletes to speak about their own mental health struggles, too.
But others feel that Simone Biles’ withdrawal is a display of weakness and selfishness. Some have called her a “quitter.”

“Simon Biles calls herself the Greatest of All Time – but no GOAT would quit on their teammates like that, costing them an Olympic gold medal,” wrote British journalist Piers Morgan. “Get back out there, Simone – you’re a great champion not a quitter.”

“Simone Biles can quit and never compete again if she doesn’t want to, but she quit on her team in the middle of the biggest event that they will have in five years,” radio host and sports commentator Clay Travis declared. “Her performance and/or failure to perform may well have cost her team the gold medal, and she brought this pressure onto herself.”

“This is Twilight Zone stuff — a bizarre kind of ‘mental health’ fundamentalism is overtaking the culture,” wrote journalist Michael Tracy, responding to a New Yorker headline praising Biles for “radical courage.” “She is genuinely receiving more plaudits for withdrawing from competition at the last second on supposed ‘mental health’ grounds than if she’d actually won the Gold Medal.”

Also this week, Naomi Osaka, the four-time Grand Slam champion tennis player who many expected to win the gold medal at the Tokyo Games, was stunned by an early loss, ending her Olympic quest.

“I definitely feel like there was a lot of pressure for this,” she stated. “I think it’s maybe because I haven’t played in the Olympics before, and for the first year, (it) was a bit much …The truth is that I have suffered long bouts of depression since the U.S. Open in 2018 and I have had a really hard time coping with that.”

Earlier this season, Osaka, the second-ranked woman player in the world and the reigning Australian and US Open tennis champion, had shocked the tennis world by withdrawing from the French Open, where she was seeded second, and chose not to compete in the Wimbledon tournament a month later. She cited her continual struggles with depression and social anxiety.

But she also endured criticism for withdrawing and fines for not fulfilling her media responsibilities, because of her anxiety – and as a person of color, as is Biles.

We ask the question:

When will the world realize that mental and emotional health struggles are not a choice, that they are as real as any physical struggle, and that it does not help anyone to be criticized, demonized, and labeled as weak when they live with depression, anxieties, and many other diagnoses that cause pain and burdens in their lives?

It does not help to be called a quitter, selfish, lazy, or be told to get over it, suck it up, or that it’s all in your head, diminishing the feelings and burdens they carry every day.

Perhaps — and we fervently hope — it will begin with these decisions by elite athletes to say, “Enough is enough. We can’t and won’t do it the same way anymore. The pressure to achieve and to win — to carry the weight of the world on our shoulders — is too much, too damaging, too dangerous.” Perhaps doing so will not only change the course of expectations for athletes, but will change the course of expectations, understanding, and reactions to every single person’s struggles with mental health when they feel as if the weight of the world is on their shoulders.

It’s okay not to be okay,” said Michael Phelps, a veteran in this struggle. “We’re humans…We all need to ask for help sometimes…If we’re not taking care of both (our physical and mental health) how can we expect to be 100%?”

If these athletes can create a change in attitude about the stigma still associated with mental health challenges and the approaches to treating them, their biggest legacies will not be their multitudes of Olympic medals, world championships, and record-breaking achievements. Rather, their legacies will be about the way they courageously opened up about what they have faced, so that others everywhere can know that they are not alone with what they are facing, too.

They are changing the world, and no longer will the weight of the world be on their shoulders.