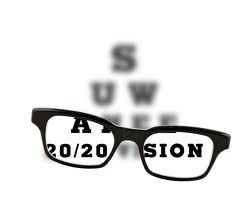 We have all heard that old adage – “hindsight is always 20/20”.   The older we get and the more experience we gain the more we see how truthful that adage is.  With age, we hope, comes maturity and with experience, we hope, comes greater wisdom.  We’ve all had moments in our lives in which we so badly wish we could foresee the future; we wish that we could have a crystal ball revealing to us how things would play out for us in the end.  But “unfortunately”, that’s not how life plays out.  There is no cyrstal ball, no magic formula, that predicts with certainty things to come:


Will the person I’m thinkning about marrying truly be the best partner for me?
Will this job I’m thinking about taking ultumately be the best one for me?
Will the surgery I’m thinkning about having bring the health I desire or will it complicate my health even more?
Will sharing a long-held secret that I feel I need to talk about be the thing that lifts the burden from me or will it instead bring greater pain and withering judgment from those around me?
Will I live long enough to fulfill the dreams that I have for myself and will defering things today ultimately be something I will regret if I never get to do them later on?


Hindsight can be an absolute gift — and it is.  Take a moment to think back upon your life — a pivotal experience you had, a job you did or did not get, a guy or a girl you dated but broke up with, a promotion you didn’t take, a move you made — and how those situations affected the course of your life.  Give thanks that some things you wanted at the time or thought were best for you didn’t come to you.  Give thanks that instead you received other things – things you really needed, things that were actually better for you.  Be grateful that you have the ability to look back on your life, with the distance of time, to see that – even though at certain times you couldn’t understand why some things didn’t go the way you thought they should – ultimately the way they actually did go was truly the best for you, better even than you ever could have imagined for yourself.


We have a friend who just this past winter found himself in a very dark place.  He woke up one morning feeling totally anxious, utterly depressed and feeling as if the entire weight of the world was on his shoulders.  He felt alone.  He was afraid.  He could see neither light nor hope.  He was lost and saw no way out.  On that dark morning he literally pulled the covers up over his head and retreated into a pit of despair.  He cried tears of anquish and then he cried out for help, for his burdens to be lifted.  In that moment he thought to himself that his life could not possibly get any worse.


But now, just five months later, our friend sees his life not through the prism of darkness but instead through the prism of light.  He has emerged from his despair after months of soul-searching, reflection, prayer, and a time of retreat from the burdens that were weighing him down.   He also found others in whom he trusted and to whom he could share intimately his sorrows, his fears and his anxious thoughts. All of this combined to begin to heal him and carry him to a better and more peaceful place.


Today, as he looks back on that dark time he is able to say that he is actually grateful for that day, for that time, because that drkness caused him to seek help; the darkness revealed things about him that needed to change, areas in which he needed to grow.  That day actually prevented him from sinking even more, from plummeting to new depths from which he may never have emerged.  He can now see with greater clarity – with the hindsight of 20/20 vision – that going through that dark period was indeed a gift, a crucible through which he became stronger, healthier and more content.  He feels lighter. The weight in not heavy at all now.  He is in many ways a new person, a person walking in greater freedom and joy.  He sees now what he could not see about himself before.  And in looking back, he realizes that he needed to go through that darkness even if at the time he couldn’t see how it was in his best interest.

Look back on your life. Can you identify times such as those, times that actually, as you can now see, ultimately helped to make you stronger, wiser and healthier in vital ways?