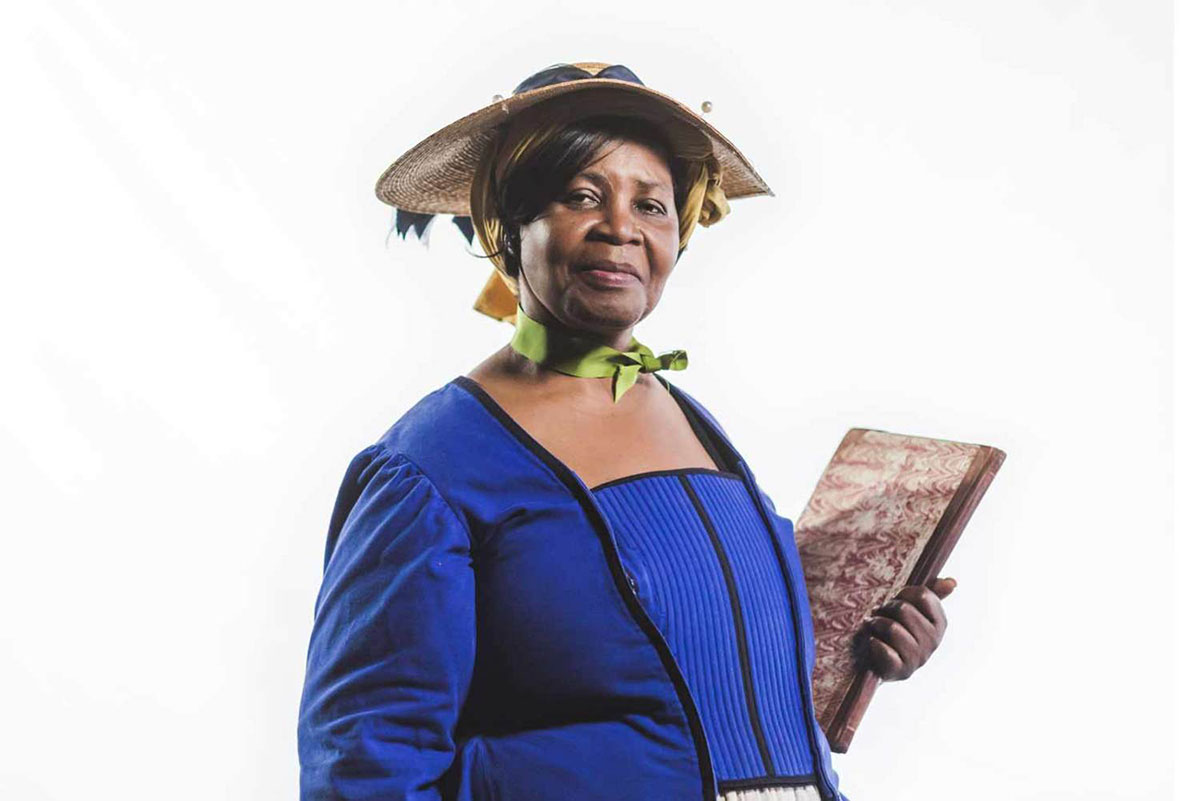 On this last day of Women’s History Month, we are sharing this personal entry by one of our team members listening trainer and compassionate listener Elizabeth Givler.  Elizabeth loves history and researching the stories behind other’s lives.  She recently toured the historical sites of Williamsburg, Virginia with her teenage daughter.  What follows are Elizabeth’s thoughts about what she learned, felt, and discovered from one of the female historical re-enacters about life as a free mixed-race black woman in U.S. Colonial times.

“I am Edith Cumbo. Let me tell you my story.”

The first time I listened to Ms. Edith Cumbo at Colonial Williamsburg Virginia was life changing.

Ms. Cumbo was a free Black woman of mixed race. Her father was African. Her mother was from Ireland, and had been an indentured servant. When her father died, Ms. Cumbo inherited the family farm. She owned 50 acres of land, and grew several crops. She owned her own horses. She was also an entrepreneur. As a laundress in Williamsburg, she really knew everyone’s dirty laundry. I sat down on a bench to hear about her life as a laundress.

I got much more than I bargained for.

(Note: I am not a professional historian, and hope I got all the facts correct. All words attributed to Ms. Cumbo are paraphrased as I remember them and not a reflection upon the actor-interpreter’s scholarship.)

Mrs. Cumbo: I have to be very careful and know the laws here. There are specific laws for Negroes, whether slave or free. This is why:

The first colonists didn’t come to farm. There were already farmers here – the Indians. The colonists came to conquer the Indians, live off their farms, and get their gold. But that didn’t work because the Indians fought back. The Indians also knew the land and could hide. So when conquering them didn’t work, the British promised “rivers of rum” to desperate white Europeans, in exchange for working the land. But the indentured servants saw that there were no rivers of rum, and couldn’t work in 100 degree heat and humidity that was so unlike Europe. There was a 30% mortality rate. So many ran away before paying off their indenture. Because they were white, they blended in with everyone else, and it was hard to find them.

So then the [British colonizers] decided to import Africans, who were easy to identify because of their skin color, didn’t know the land, and didn’t know where to run. They made laws that applied to all Negroes – not slaves or free. We can’t congregate in groups. We have to have papers saying we can do certain things. It doesn’t matter what our status is. So here I am, head of my household, free Black woman, and I have to be very careful. I carry my paper saying that I am free at all times. They don’t know what to do with me, this Black woman who owns property and runs a business.

Ms. Cumbo (looking right at me): Ma’am, your mouth is agape. Did you not know this?

Why, no, Ms. Cumbo I didn’t know. I learned that the United States’ historical beginning was all about escaping tyranny, making a better life, getting religious freedom, the pioneering spirit of hard work and making our own way. Not enslaving other people to do the work for us.

And about the Native Americans – I only learned about the friendly First Thanksgiving in Massachusetts. I even played a Pilgrim in elementary school. We liked the “Indians.” We girl pilgrims served them mashed potatoes and turkey. I did not learn that colonizers in Virginia tried to conquer and rob them.

Additionally, I thought “Jim Crow”-type Laws were enacted after the Civil War – not that they actually started in 1600’s Virginia and are embedded in our nation’s foundations. (Virginia became very powerful in the founding of the United States. George Washington – first commander in chief and the first president, Thomas Jefferson – author of the Declaration of Independence and third president, and James Madison – “Father of the Constitution” and fourth president, were also Virginian enslavers.)

Me (silently): Ms. Cumbo, in less than an hour, you changed my view of my own history and now I am questioning my own identity as an American.

Ms. Cumbo went on to say that those “fancy” folks – the plantation owning enslavers – used those Negro laws to appease the poor whites who were getting angry due to their poverty. (“Most whites in Virginia lived in 12×15 foot, dirt floor shacks. The fancy folks owned the plantations.”). No matter how bad things got, at least the poor whites weren’t Negroes; they could congregate without suspicion, for example. Another benefit – since it was beneath the “fancy” folk’s “station” to get dirty or do manual labor, plantation owners elevated the poor whites’ station by hiring them to be overseers, and giving them authority over the enslaved. The enslaved folk then called the overseers “crackers,” after the crack of the whip.

Ma’am, your mouth is agape.

Why, yes, Ms. Cumbo, it is. I did not learn any of this in school. Also, I thought “crackers” meant we were white like saltines, not that we were whippers.

One of my strengths is connectedness. As I listened to Ms. Cumbo, I could see the connections between what she was sharing and the political, racial, and legal issues of the 21st century. I no longer thought, “What has happened to my country?” Rather, I thought, “No wonder this is happening in our country.” Black Lives Matter. Political unrest. White Privilege. Me too. Thin Blue Line. Voting Rights.

I have not missed a chance to hear Ms. Cumbo on my visits to Colonial Williamsburg. On March 11, 2022, my daughter and I went to celebrate Women’s History Month.

It wasn’t illegal at first to teach enslaved Africans to read and write. In fact, the more educated the African, the more valuable they were. The [British] knew that Africa was a continent that had countries with Universities. Some Africans came from these countries. They were… what you do you call… “Muslims” and not Christians, who could even speak Latin. One [educated] African earned his freedom by sharing his discovery of a cure for snake bites with the governor. Africans who could read and write were valuable because they could run the shops, keep the books, and be a proxy for the merchants. But I run my own business. I do my own bookkeeping and such. I have to know the law and listen to what is being talked about so I can remain free.

Mrs. Cumbo, you just changed the way I thought about how enslaved people were uneducated, but white people were. Embarrassing. How smart you must have been to survive and thrive!

They changed the law a while back. It was illegal to enslave Christians. [That’s why they could enslave educated Muslims.] So one woman sued – you know, Mr. Keyes’s daughter, who was born to an ‘unknown negro woman’ – C’mon now!. She said that because her father was a Christian, she was a Christian, and therefore her father couldn’t enslave her according to English Law. The court agreed, and she won her case. But then they changed from the Christian English law to Jewish Law or Pagan Roman Law. The mother’s status now determines the status of the child, not the father’s. But since my mother had never been a slave, I remained free. People are suspicious of me as I walk the street.

Mrs. Cumbo, not only do you impress me with your listening and business acumen, you just changed the way I think about the United States as a Christian nation.

You know, I never married. If I would have married, all my property would be my husband’s. Why would I give up my property and all my hard work for a man? But relationships happen despite the law. I did have a child. I wouldn’t share who the father was. So I was tried for bastardy. I took my son with me, and when the court saw that he had blue eyes and mole like one of the men on the lower court, all charges were dismissed.

Her son grew up to fight side by side with General George Washington at Valley Forge, a man who enslaved people like the Cumbos.

By the way, this wasn’t the only court battle that she won. In 1778, Cumbo took steps to protect her property and household when she took the initiative to sue Adam White for trespass, assault and battery. She was awarded 1 Shilling – a lot of money for that time.

Ms. Edith Cumbo is considered to be a Nation Builder at Colonial Williamsburg, and joins the ranks of George Washington, James Madison, and  Martha Washington for embodying the “spirit of the Revolution.” Indeed she does, as a daughter and mother of Revolutionary War soldiers. What a spirit she had!

Listening to Ms. Cumbo and the other Nation Builders over the past 5 or so years has changed me. I know now that our country’s founders were indeed “young, scrappy, and hungry”, ala Hamilton, and indeed started something new against impossible odds. I also know that they were also part of a racist, classist system that informed how they legislated and wrote the declaration of Independence and Constitution. I have realized that embracing my story as an American means accepting and learning from the good, bad, and ugly parts.

History is beautiful, terrible, complicated, and complex, and so are we. At our Learning to Listen training, we teach that truly loving Someone means accepting all of their story- even the parts that are not easy to share, and to understand Someone for who they truly are. I believe this is the same for our country. Let us listen to one another with compassion and grace.