Fred Rogers, three other dudes, and coming out of hiding

One of Fred Rogers’ favorite things was to make connections betw 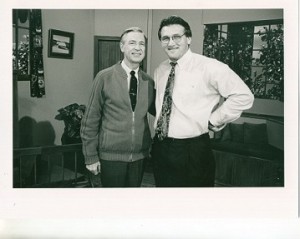 I have often imagined his delight at the connections I have made these last several years, traveling the country with the message of our unlikely bond. Many of them have been profound but fleeting. Others have developed into friendships that will endure as long as I do.

That’s because Fred shared it. Michael and Tom and Fred believed, as I do, that loneliness and isolation are among the greatest afflictions known to humanity. For his part, Fred gently coaxed us out of hiding, shining the light of his love and supernatural presence on our complexity, struggle and inner messiness. “Anything mentionable is manageable,” was one of his favorite sayings. And he meant anything. 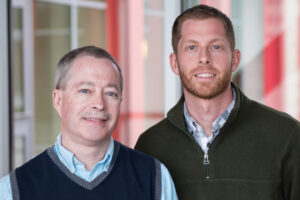 e years ago, Michael and Tom, two ordained ministers who had served more traditionally in Christian churches, decided to take a giant leap and create Someone to Tell it To, a remarkable non-profit which provides just that. Boiled down, the two men exist to listen, free of charge, on the telephone, in person, via text or skype or email or carrier pigeon, to anyone who wants to share the truth of their insides.

It’s hardly surprising that Fred Rogers had been one of their foundational spirits. Michael and Tom called me a few years ago after coming across my memoir, I’m Proud of You: My Friendship with Fred Rogers, in which I was candid about my suffering and depicted Fred’s healing response to it. After five minutes on the telephone in that first conversation, it was clear that we spoke a common language.

“Everyone has a story to tell and they should have the opportunity to tell it,” Michael told again me a few days ago. “And tell it without being afraid that it will be dismissed or disrespected. Every story has value and importance.

“When we are able to tell our stories from the heart we become our most authentic selves,” he said. “We gain power because it helps soften the hard edges of our lives, and brings light into the dark corners.”

In their recently published book, the two men reveal their own hard edges and dark corners. 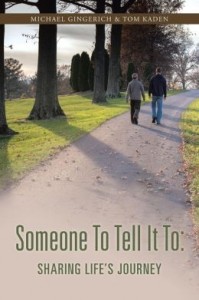 And from their base of Harrisburg, Pa., Michael and Tom have listened to hundreds of others tell their true stories, which so often include the fear, regret, sadness, anger, shame and self-doubt common to all of us. Fred put it this way, quoting his good friend, Henri Nouwen: “What is most personal is most universal.” Yet most of us work so hard to keep our stories secret.

Michael and Tom, (and their families) have done this work at great personal sacrifice, but the mission—trying to make the world a little less lonely, a little more real—is gathering momentum. William P. Young, author of the blockbuster novel The Shack, was the guest speaker at a recent Someone To Tell It Too fundraising banquet. Prominent endorsements of their work pour in.

“The prayerful listening and counseling that these two men do is one of the most effective instruments for the healing of minds and souls that I know about anywhere in the world,” said nationally known pastor and sociologist Tony Campolo. “What a treasure it is for us to have these men serving so faithfully at work that is essential and, yet, has been left largely undone.”

The next chapter in their journey comes on Saturday, April 18. That day Someone To Tell it To hosts an event titled, Creating An Authentic Life Through Storytelling. Michael and Tom will share their stories, and have invited me to describe my transformative friendship with Fred. The day will conclude with a show called This is My Brave—performances of music, poetry and dramatic readings by eight people who have suffered or are suffering from mental illness. Click here to read more about This is My Brave. I’ll say more about that in a later blog next week.

It’s bound to be a memorable day.

The program at Market Square Presbyterian Church in Harrisburg lasts from 2 to 6 p.m. If you are anywhere close, please join us. I would say there is a money-back guarantee, but the event is free. 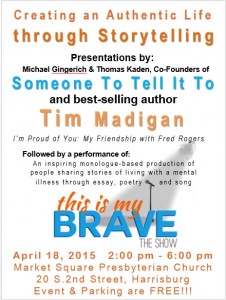 I’m sure there will be a few tears on that Pennsylvania Saturday a few weeks from now, but I anticipate much laughter and joy, too. The great irony is that true happiness and freedom are won by turning toward our pain and sharing our messiness with others, by coming out of hiding.

Women are much better at this than men. To the extent we can, Tom, Michael and I want to assure other males that you can be vulnerable and talk about your most painful inner realities and still do stupid man-stuff.

Some day I’ll share the story about the three of us and the chocolate martinis at a hotel in Hershey, Pa. Or maybe I won’t. We all love hockey and are prone to salty language when we’re together. Typical men, in other words. But we also go places in our friendship that many other guys won’t.

“After she read your book, a former board member of ours said that the three of us were the most open and vulnerable men she had ever met,” Michael said. “Something about that can be sad, I guess, but it was a real affirmation, too. We are three guys with a similar message and that’s what makes it unique. We’re guys.”

Connected by Fred. Thank you for that, my famous friend.