For all of us 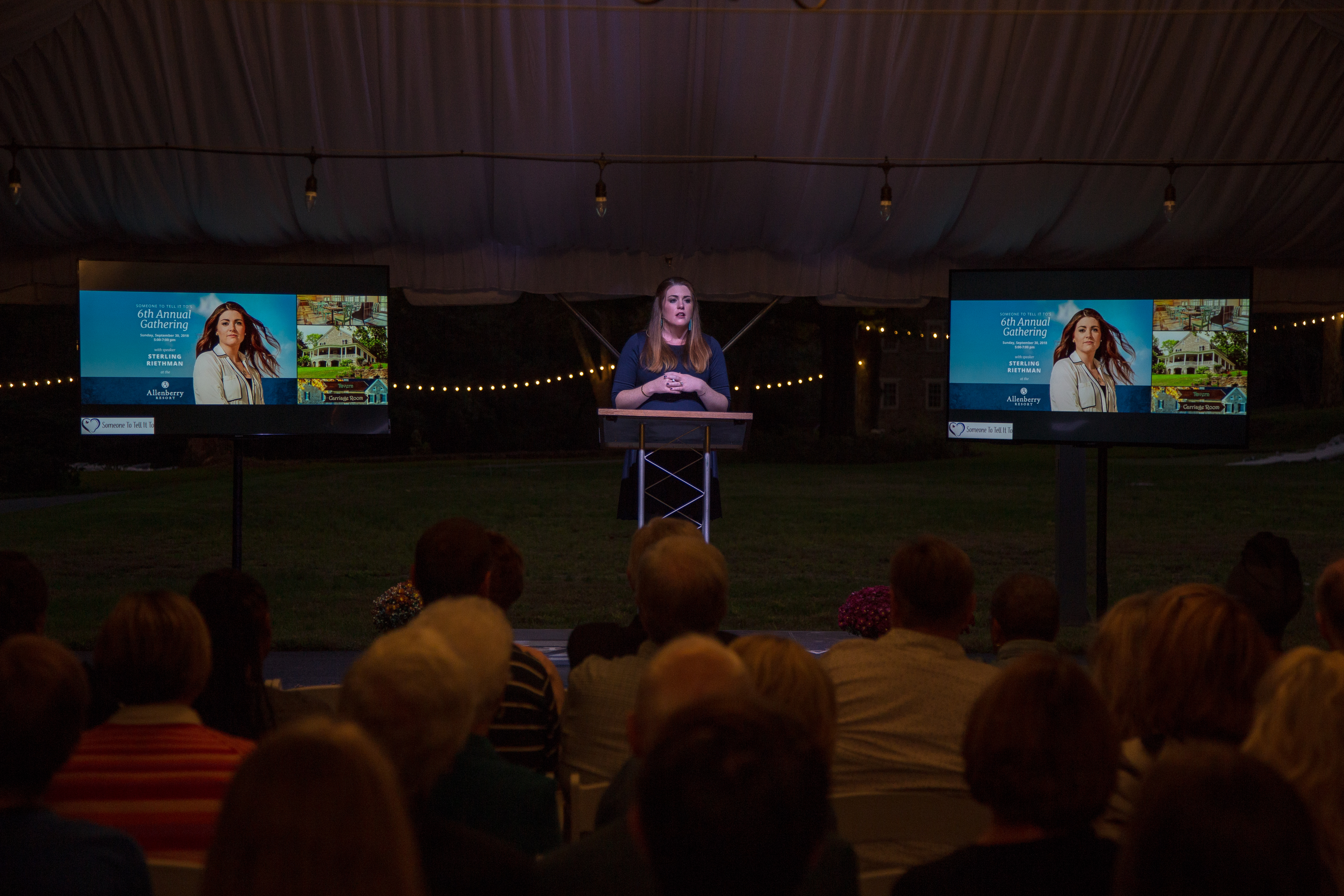 They rose as one. Under a beautifully decorated white tent on a nearly perfect early autumn evening, they rose in a warm standing ovation. They were liberal, moderate, and conservative. Republican, Democrat, and Independent. Evangelical, Catholic, mainline, and agnostic. African American and Caucasian, gay and straight. Millennials and those in their ninth decade. They had come to learn what Someone To Tell It To had done in the last year, to support its mission and ministry, and to hear one young woman’s story as a survivor of sexual abuse.

As we continue to reflect on that evening, it was the standing ovation for Sterling Riethman, a leading voice in the #MeToo movement, that resonates most indelibly in our minds and on our hearts. Sterling is a recipient of the Arthur Ashe Courage Award at this past summer’s ESPY Awards, a former swimmer and gymnast, and an expectant mom. She spoke eloquently, diplomatically, and honestly about her experiences as a survivor of former doctor Larry Nassar’s repeated assaults on more than 250 girls and a few boys—a list that is still growing—as a U.S. Olympic team physician and an employee of Michigan State University. 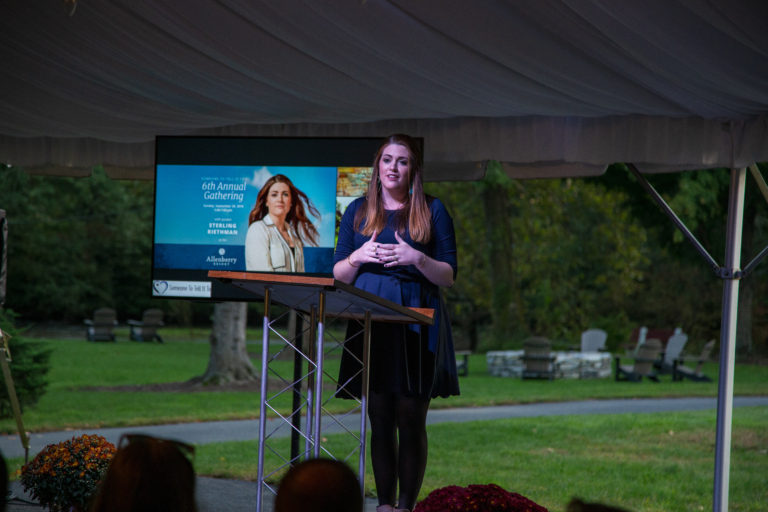 It was that standing ovation which signified an understanding among the entire audience that sexual abuse—and abuse of any kind, really—is wrong. It’s an understanding that needs to be seen and heard so that abuse can be stopped.

For us, as the co-founders of Someone To Tell It To, this understanding is personal.

First, simply as human beings who strive to be empathetic and compassionate, the statistics we read are alarming—one in four females and one in six males will be sexually abused or assaulted during their lives. If we have any basic concern about our human sisters and brothers, we believe we need to pay attention to a reality such as this.

In our work—listening every day to the stories of people who are lonely, lost, grieving, afraid, and uncertain about who they are created to be—the very issue that most underlies those stories is abuse. We can’t ignore it. We hear so many raw, real stories that include sexual, emotional, spiritual, mental, and physical abuse.

One of us—Michael—has his own story to tell. As a teenager at his first job, a male supervisor twice his age repeatedly, forcibly, and continually more aggressively and intimately touched and rubbed up against him inappropriately and recounted very intimate details of the sexual relationship he had with his wife. The resultant embarrassment and fear that he wouldn’t be believed kept Michael from telling what had happened for more than 17 years. He understands deeply why so many others are afraid to tell, too. 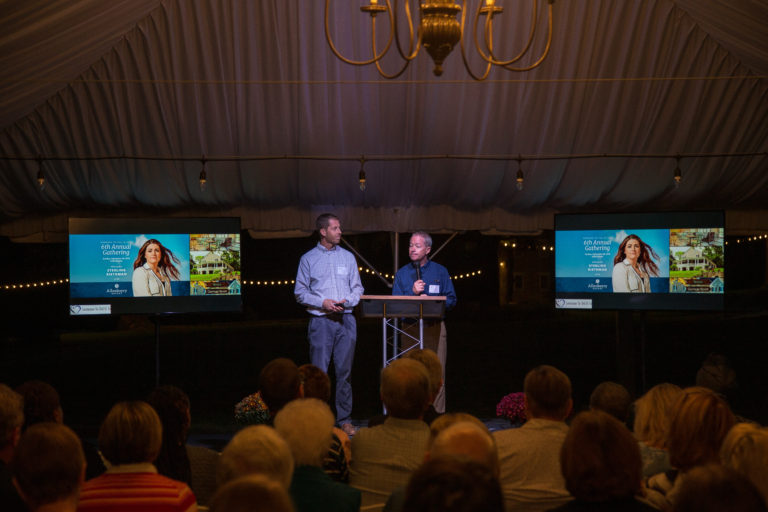 Since our annual event last week, several people who were in attendance have reached out to tell us for the first time about their own #MeToo moments, their experiences of abuse. The courage they saw in Sterling Riethman encouraged them to speak out.

Suddenly, stunningly, it all came closer and became more personal than ever when Michael’s wife Kathy told him just this past weekend that she was raped when she was a freshman in college. She kept it secret for so many years because she was desperately afraid people would think it was her fault. Her perpetrator told her it was. She believed him, and she believed a culture that implied the same thing about every person who was assaulted in this way. But now, as a result of Sterling’s courage to speak out, because of all the stories about sexual abuse and assault that have filled the news over the last few weeks, and, especially, knowing we were writing this blog, she decided it was time to speak out. To say, “Me too.” And she gave us permission to share her truth.

Long pushed down. Long set aside. Long a dark, painful secret. Now, it’s time to let the light in.

We believe her story, and every story that keeps darkness and pain hidden deep down in our souls, needs to be told. Only light can disrupt the darkness. And when light shines in the darkness—when these stories are told—people understand that they are not alone. They are given permission to share their own stories.

It is only in being heard that any of us can begin to heal.

Someone To Tell It To is about the work of listening compassionately, intentionally, non-judgmentally. So many of us have held onto our unspeakable secrets for 10, 20, 50 or more years. “I’ve never told this to anyone else before,” is a confession we hear more times than we can number. So many of us live lives of desperate loneliness for many, many reasons. Loneliness, we have learned first-hand, is one major symptom felt by those who have been abused.

Every story of abuse is a story told by someone who doesn’t want to be alone anymore. The vitriol and condemnation we are hearing from so many people in our social media and technologically-connected culture about this issue today ignores and betrays the fact that real people are hurting and need to be heard and understood. They need to be healed and have their stories honored. They do not need to be victimized again as the subjects of a virtual shouting match.

We need to start by listening so that they, along with all the rest of us, can be part of the solution, rather than those who only complicate and exacerbate the problem.

It is personal, and it needs to be. Because whether we know it or not, all of us know someone who has been abused. We need each other to break the chains that bind us in loneliness, fear, and shame. This freedom is for all of us.