Everyone Needs Someone To Tell It To: Michael’s Story 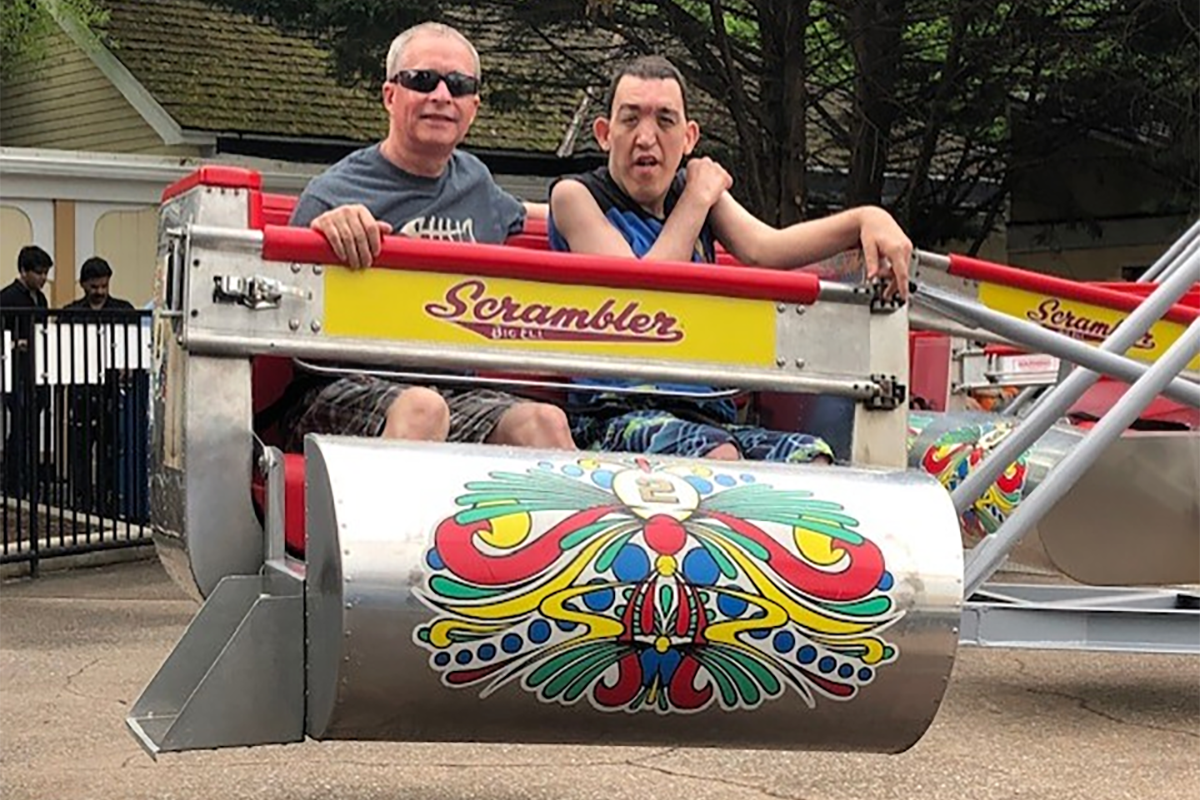 She wanted to know about grief.

Did I feel grief about my son?

About his limitations? About the things he wouldn’t do, who he would never be? About the limitations his care places on Kathy and me and his brothers?

It was late into our 90-minute conversation when she asked me about grief. There was something I had said earlier that made her want to probe more about the grief I might feel over who our son Matthew is and—maybe more significantly—isn’t.

Of all the questions she asked about his severe intellectual disabilities and autism—every single one thoughtful, insightful, compassionate—this one stopped me in my tracks, metaphorically. No one had ever really probed me about grief in relation to him before.

I welcomed the invitation to explore it.

Corine has been becoming a dearer and dearer friend to Tom and me. We met her in person two summers ago when we made a presentation for the International Listening Association in Dublin, Ireland. Previous to that, we had had a Zoom conversation with her about her work as a Chief Listening Officer in a hospital system in the Netherlands. We saw her once more, last year in Vancouver, British Columbia, Canada, when we presented again to the members of the ILA. We instantly liked her during the initial Zoom conversation, and found a synergy with her over our work and our common passion for hearing the stories and experiences of others, especially those living with physical, emotional, and spiritual uncertainty.

Did I feel grief about my son?

“Yes, I have,” I answered without hesitation. And I continue to.

The feeling comes unexpectedly when it does. Often, it’s when Kathy and I are doing something that we can only do without Matthew—or at least without major planning and logistical organization—such as shopping together, on the extremely rare occasions we could actually go to a movie, or attend a concert, or stay overnight anywhere. It’s a feeling of loss for things he’s never had, the things he’s never been able to do and never will.

It comes, and brings sadness. When we do something fun with our young grandchildren or other sons that we can’t easily do with Matthew. A lingering melancholy. The fact that we are enjoying something that he can’t easily be part of makes me feel sad for him and for us for what we can never share with him. We hate to leave him out of any important parts of our family’s life. We try our very best to make every accommodation to include him. But at times, it’s just not easy.

I remember the day he graduated from high school. He was 21, the maximum age by law in which he could have still attended school. Hershey (Pennsylvania) High School gave us the option to have him graduate on the big stage with all the other graduates—several hundred of them, very few of whom he ever interacted with—or to have a small, private ceremony arranged by the special education department of the school where he was nurtured and loved by some very special teachers and aides.

Kathy and I had a serious dialogue with one another. Was it important to have several thousand people see him on the stage, to show his inclusion, which meant a lot to us, even though he would hate sitting there for several hours, and would need someone constantly by his side to keep him occupied, quiet, and undisruptive? Would he even understand or tolerate any of the proceedings?

Or would it be best to hold a more intimate ceremony, attended by the students, teachers, and aides with whom he was with in school every day? One where he’d be the center of attention and much happier and more likely to enjoy with the people who really knew him?

We decided to forego the “statement” a more public graduation experience might provide for one in which Matthew was the focus. One that would have elements he could appreciate.

They provided him with a traditional cap and gown; he refused to wear the cap, as he refuses every head covering we have ever tried to put on him. All the special education students and staff in the school assembled in a large room to witness his big moment. A string ensemble from the school orchestra played Pomp and Circumstance as he was wheeled into the room. The school principal and superintendent were there to witness the ceremony and say a few words. A big cake, punch to drink, and other refreshments were laid out. He received gifts that he loved: New bathing suits (they knew he wore them every single day of every single year), t-shirts, and gift cards among them. We and his brothers were there; his oldest brother Adam flew home from Germany where he was working at the time, to attend. So were his grandparents and great-grandmother. The ceremony was touching and intimate, fully appropriate for him and enjoyed by him. He may not have known why this was happening, but he knew that he was the center of attention. He loved it! We all went out to lunch afterwards. It was a beautiful and extremely special day.

And it was sad, too.

We knew this was probably the last big highlight of his life. I felt wistful recognizing that. There would be no more graduations, no new jobs to celebrate, no wedding or big trips, or awards, or accomplishments, or children. None of the things his brothers would have. None of the achievements. None of the milestones ahead that parents might want for their children. For him, they are not going to happen.

Grief at who he might have been, but can never be. We’ll never hear him say even one word. He’ll never be able dress himself. He can never be left alone. He’ll never have independence. He’ll never fall in love. His world will always be very small. His impact? By the world’s measure and standards, there’s little promise it will be big or lasting.

During our conversation, I’d told Corine about an overwhelming feeling I felt the weekend before. It’s what prompted her to want to talk about grief.

We had met our son, David, his wife, Janelle, and our granddaughters, Emma and Elle, at HersheyPark, one of Matthew’s favorite places on earth to visit. In the summers he loves to ride several of the roller coasters and shriek with delight as he’s jostled around. He thrills to the speed and the laughter and screams of others. We can hear the roller coasters from our yard all summer long. We love the sound! Riding them is one of the very few, but special, things he and I do together each summer. We have season passes. Except, we couldn’t go this past summer because he wasn’t able to wear the required COVID-preventative mask.

He couldn’t go last weekend, either, when it was open for the holiday season with tens of thousands of lights, hot chocolate, holiday music, and some of the roller coasters running—again, because he can’t wear a mask. He also hates the cold and just wouldn’t have enjoyed how cold it was that afternoon. In order to see our son David and his family safely, we decided to meet them there because everything is outside. One of Matthew’s caregivers stayed with him while we went.

But I felt sad that we were at one of his very favorite places and he wasn’t. We had a good time; it was a lot of fun. But I felt an overpowering shroud of grief at what he couldn’t be part of. He would have loved seeing his brother and sister-in-law and the kids. He would have shrieked for the only time all year, riding a roller coaster. And it wasn’t just these simple things which caused my melancholy, either—it was that they represented all the things he just isn’t able to do with us or anyone.

I can’t tell you how much Corine’s thoughtful and sensitive questions meant to me. She helped me to uncover and understand those feelings, and why I was feeling them. And I told her so. I needed someone to tell it to, the day we talked. And I am so grateful that she wanted to listen. Even us listeners need someone to tell it to some days.

I don’t want you to think that I’m sad a lot or live with strong feelings of grief all the time. Because I don’t. There’s so much joy, so much laughter, so much love with Matthew, even when life with him is hard.

But every once in a while, there comes a gushing rain that washes over me and drenches me with sadness, and longing, and grief. At what is and what is not. At what will never be. At what we’ll never know. Holidays, interestingly, as much as I absolutely love and look forward to them—especially these end-of-the-year holidays—can often bring a sadness that comes and goes. Yet sometimes it lingers a little longer than I would like. Perhaps this year, it’s lingering because this whole year has been filled with loss and sadness and grief in all kinds of ways for just about all of us. For different reasons, maybe, but the losses and longings are very real, no matter what they are.

I also want you to know this: remember the impact I sometimes worry that Matthew won’t ever have? As I’ve written and talked about many times before, he has taught me some things no one else can. His very unique life has shown me, given me, several unending, infinite, and major life gifts. I am exceedingly grateful for them all.

Unconditional love. Compassion. Patience. Grace. Empathy, especially for others who live with disabilities and for those who are routinely discriminated against. Whose everyday lives are harder. Whose seeming brokenness is not really brokenness at all.

And I am reminded over and over again, that all humans are worthy of our love. Of being honored, of sharing in a common humanity, of being seen as beautiful, of deserving tenderness and empathy.

Corine listened, and gave my grief the dignity it needed.