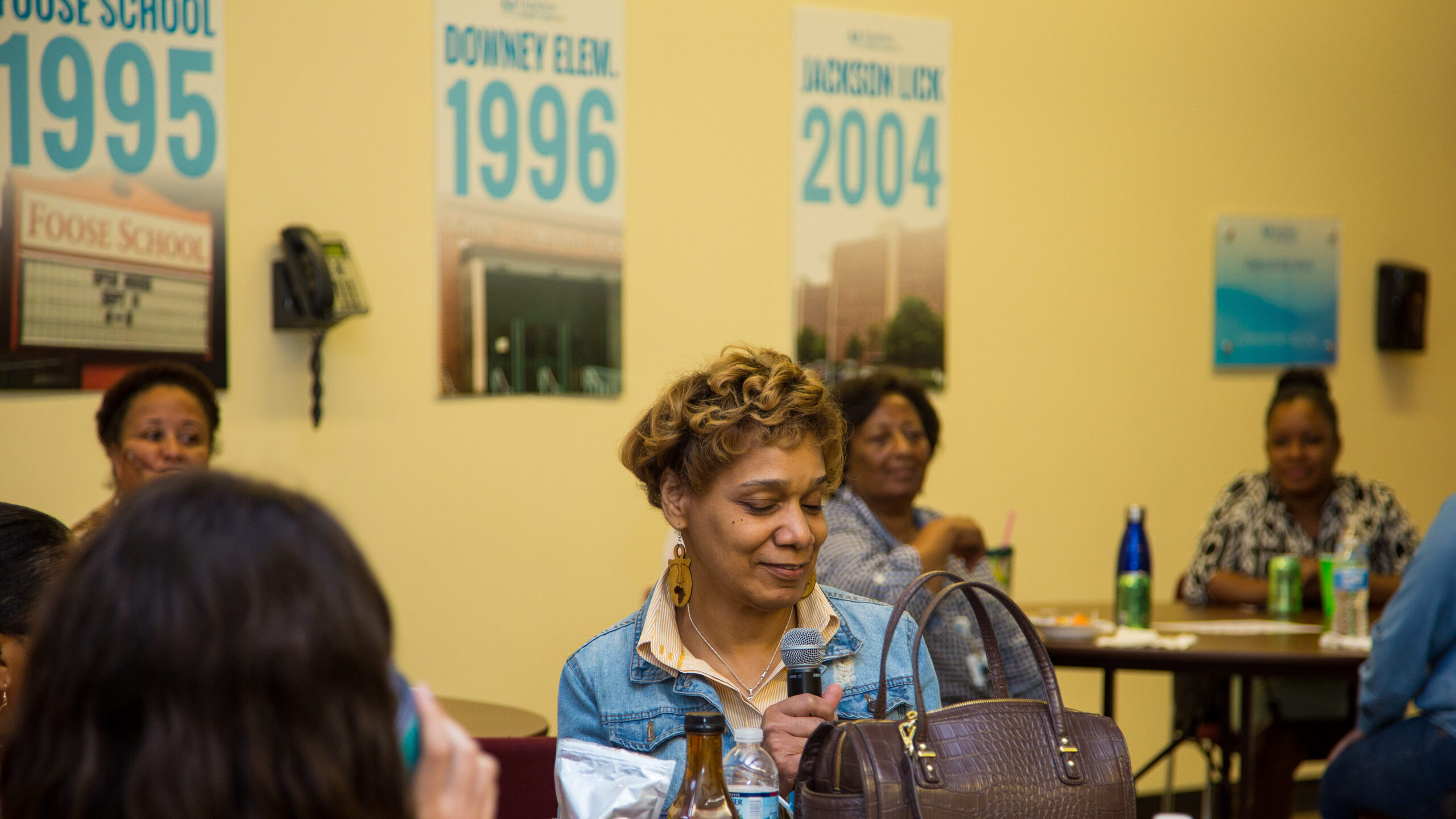 Six portraits hung on the wall. Each one represented momentous occasions in the life of the organization. Hamilton Health started with a simple vision that every member of our community, regardless of their ability to pay or their insurance status, receive holistic, quality health care, has now become an indispensable staple of Harrisburg, Pennsylvania. The first portrait, taken in 1969, displayed Hamilton Health’s birthplace, a clinic in the basement of a Lutheran Church, up to a recent photo of the newest facility located at 110 South 17th Street. 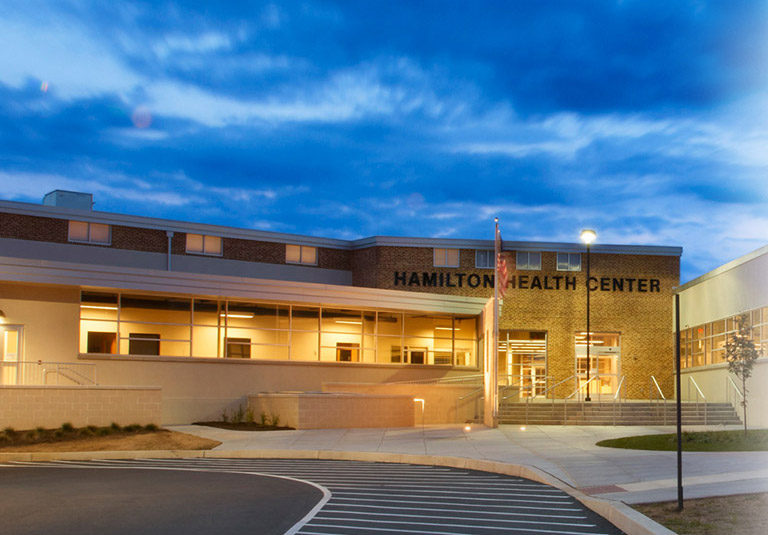 As we sat in the back of the room with a mild case of jet leg from our recent European expedition on behalf of Someone To Tell It To, observing the first major staff training in compassionate listening our non-profit has done, we reflected on Hamilton Health’s history as an organization—and Someone To Tell It To’s history as well. Like Someone To Tell It To, Hamilton Health Center started with a simple idea: to improve the health of Central Pennsylvania’s residents by delivering high quality, respectful, and patient-centered services regardless of health, economic, or insurance status—fundamentally, caring for the needs of those in the margins of society. 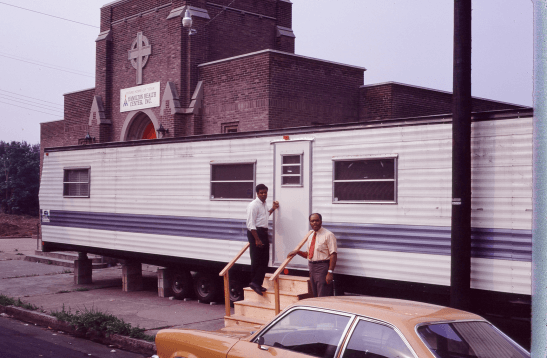 So here we were, the co-founders, seated as observers, not leaders, in the back of the room, admiring where we’ve been, where we are, and where we are going as an organization. We, too, had several snapshots scrolling in our hearts and minds.

One of our favorite portraits on the wall that day was of a trailer, on stilts, in front of the Lutheran Church where Hamilton Health’s staff first provided care. The photo was so perfect, so raw, so modest, reminding us of perfect, raw, and modest beginnings for Someone To Tell It To. It reminded us of one of our earliest, most raw experiences, which we briefly wrote about in our second book, Someone To Tell It To: Moved with Compassion:

It was raining hard that morning. The cold was penetrating. A gloom pervaded the city. As we hurried through the rain and up the ramp to her door, there were two things we wondered about aloud—if she’d have any cats and if she was a smoker. We had never met her before. Both of us are allergic to cats and smoking tends to easily give us headaches.

We had the first part of an answer the moment she opened her back door—a cloud of smoke poured out and over us and into our lungs. Her apartment reeked of heavy smoke. Oh well. We could suck it up—literally—and endure it for the time we’d be there. We weren’t there long when her cats ambled out of her bedroom and proceeded to rub themselves up against both of our legs. Repeatedly. All we could do was smile at each other discreetly, amused at the circumstances and go on.

A local social service agency had suggested to us she could use a visit. She was all alone, living in a city in which she had no relatives and no real friends. Confined with just her cats in the tiny apartment, overcrowded with her meager belongings, confined to a wheelchair, she described to us her life story.

Divorced, estranged from her son, her parents and siblings dead, starting over in a community she had moved to in an effort to escape her broken past, afflicted with multiple diseases, she felt utterly alone in this world. as we listened to her litany of indignities, disability and distress, we couldn’t miss recognizing the endless sorrow she was feeling because life had turned out to be so cruel to her.

Before all this happened, she’d had a successful career in finance, she indicated. She’d made a lot of money. She traveled frequently. She had respect and prestige. She had friends and a life of activity and satisfaction. But now all of it was only a distant memory. It had all been destroyed. Gone. Never to return in her older age. She didn’t explain how it was lost or why, just that it was. The question of “why” could come at another time. None of the memories could make up for the ache and emptiness she was feeling now. Her tiny apartment was, in essence, a prison, a place from which she could rarely escape.

Even worse, though, was the solitary confinement of her spirit and mind.

Her hurt was profound. Her longing for relief was palpable. Her broken life was seemingly without hope. We wondered how she could go on. We asked what sustained her in her affliction and loneliness.

“My faith,” she answered.

It was mind-blowing for us to believe she still had any faith. After so much was gone, after so much seemed lost, it was hard for us to imagine how she wouldn’t be bitter, indignant. But she wasn’t. She still believed in the faith of her youth, hoping there was a God who was still with her and was with her even—or maybe especially—in the prison in which her circumstances confined her.

“Your visit today was a reminder that God does hear my prayers.”

“I define connection as the energy that exists between people when they feel seen, heard, and valued; when they can give and receive without judgment; and when they derive sustenance and strength from the relationship.” —Brene Brown

After leaving her, we were scheduled to attend a luncheon, one for which we needed to dress in shirts and ties. We reeked of smoke and had more cat hair on us than was good for us. The smoke penetrated everything we were wearing. So, we rushed to Tom’s home, which was closest to us that morning, to quickly shower and change into something fresh and clean. There was no way we could go into such a public forum with the clothes we had on. Such is the life of meeting people where they are; we often don’t know what we’re getting into. It’s a usual occurrence to need changes of clothes for the circumstances of different appointments each day. Entering into others’ worlds isn’t always neat nor is it always stress-free. But we wouldn’t have it any other way. To create the context for other’s comfort in opening up to us, they need to know we’ll do our best to come to them in the places and ways most safe for them.

Some of the most meaningful things in life happen organically, growing slowly, methodically, sometimes painstakingly, over a lengthy period of time, and we need “Ebenezers” to remind us of where we’ve come from and how we got to where we are today. Long ago, people built Ebenezers, or altars, as a way of remembering what had occurred in the past for future generations to hold onto.

In every dream, there are Ebenezer moments. We need to celebrate those milestones by building altars, or taking photographs, or writing blogs or stories, so we celebrate in the moment and don’t forget in the future.

One of the problems in our world is that we don’t take enough time to admire what has gone right. We can spend so much of our time focusing on what hasn’t gone the way we wanted, in the time frame we hoped, or with the precise outcome we envisioned. But when we under-celebrate, we invite cynicism and feelings of unworthiness.

We need to celebrate more.

We need to celebrate better.