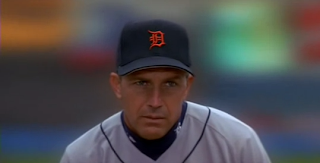 We both are baseball fans. Growing up we both played baseball, we enjoyed watching some of the classic baseball movies, we traded baseball cards with friends, we read some historical novels about baseball, and the list goes on and on. And as time has moved on our love for the sport has continued.

There is a fundamental of pitching that we remember learning about, one that most pitching coaches call ‘Clearing the Mechanism.”

This is what the Pitching Academy, an organization that helps pitchers at any level understand pitching fundamentals that can lead to success, conveys about this vital component of the sport:

Ultimately, to “clear the mechanism” as a pitcher means to remove distractions so that you can focus on the things you are able to control (i.e. throwing the pitch you would like to pitch and focusing on the catcher’s mitt or target you would like to throw to).

If you are a fan of baseball and movies then chances are you’ve see the film “For the Love of the Game”, starring Kevin Costner.  Costner portrays a veteran pitcher in the big leagues at the tail end of his career trying to prove to himself and others that he still has what it takes to be successful in “The Show” (the big leagues).

One of our favorite parts of the movie is when he becomes aware of all the sounds in Yankee Stadium before a championship game – the screaming fans, the hot dog vendors, the opposing team, etc.  After becoming aware of his surroundings he says the words, “clear the mechanism”, then all at once he hears nothing.  All he focuses on is his catcher.  Wouldn’t it be great if you could do that when you were on the mound?  Well, you can.

I’m not saying that you will experience the same thing that is depicted in the movie, that’s Hollywood; however, here are some strategies you can use to help you focus on the things that matter most:

Clearing the mechanism is a way of focusing on the things you can control while you are on the pitcher’s mound.

We believe this principle also applies to life. Sometimes life can spiral out of control and feel overwhelming. Sometimes there are a thousand distractions keeping us from losing our focus.

Yesterday, we had a moment as we were preparing for a counseling call together where we needed to “clear the mechanism”. We were distracted. The difficulty of my (Michael’s) last month still weighs heavily at times. The imminent birth of my (Tom’s) twins and the uncertainty of when they will arrive are constantly on my mind. The ever-present worry about financial stability hits us both often and hard. The intensity of some of the counseling conversations we have had lately lingers long after the calls end. So we literally took a few moments yesterday afternoon before our next call to “clear the mechanism”, which enabled us to fully focus on the call at hand. We talked openly and seriously about how we were each feeling about each of these issues. We took some time to simply be still and allow the stress to melt away. And we actually prayed together in an effort to connect even more closely with each other, but also very importantly, to connect with God who for us supplies a spirit of calm, strength, comfort and peace. It really helped.

We all need to “clear the mechanism” at times. For example, driving home after a really tough day at work, for example, by focusing “on the pitch” – whatever the pitch may mean for you. “Clearing the mechanism” letting go of all that went wrong earlier in the day. It means focusing on the things we can control and removing from our minds all the things that we cannot. It means being present in the moment. It means not second- guessing ourselves. It means not dwelling on what we should have said or done earlier in the day. It means putting it all behind and focusing on the next good thing to come.

How can you “clear the mechanism” today?