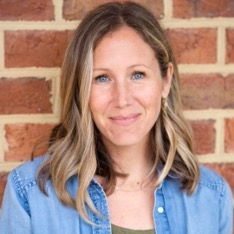 Jennifer Marshall’s life was going exactly as planned. Then, she turned 26 and everything changed.

Jenn found herself unable to control her thoughts, spinning and struggling with reality. She was hospitalized and sent home to take some time and get some sleep. But, it would take yet a second hospitalization shortly after to reveal the fact that this was not about being overtired. It was about mental illness and how it would redefine Jenn’s world in a profound way, from that moment forward.

She was soon after diagnosed with Type 1 bipolar disorder. It was a lot for her and her family to take in, but instead of burying the conversation, she embraced it and even began to share her experiences publicly.

Realizing the power of sharing her story, she co-founded and the became the Executive Director of This Is My Brave, Inc., a global storytelling initiative for people to share their stories of overcoming mental illness through creative expression at live events around the world, and online.

This episode is premiering following World Mental Health Day, on October 10. The month of October is World Mental Health Month, in which many organizations promote awareness and educational opportunities for people to learn about and acknowledge the challenges that mental illness brings to so many lives.

This episode with Jennifer Marshall is a very special one, as she talks about living with mental illness and the challenges she experiences with it.

Our Sponsors/Affiliates:
Wonders Found is a thrift store ministry. We sell quality, gently-used items donated by the community to support mission projects. Learn more about us by visiting us on Facebook!